Server Message Block (SMB) traffic is a very common type of network traffic in most organizations, and it’s one of the most common types optimized by Riverbed’s application acceleration technology. For years we’ve been able to ensure optimal delivery of SMB traffic using our SteelHead WAN Optimization solution. However, dealing with SMB in a Windows domain poses some problems.

A security and administrative problem

SMB optimization requires the server-side SteelHead to interact with the domain controller as a Tier 0 device. Many domain admins consider this a security and operational concern.

The Microsoft Active Directory Administrative Tier Model (recently renamed the Enterprise Access Model) is used to organize domain elements. The framework is made up of three tiers:

SMB optimization also requires the SteelHead to use the replication user account to communicate with the domain controller. The replication user account has elevated privileges within a Windows domain compared to standard user and computer accounts or mundane utility accounts. It’s not best practice for a network device to use this type of account, especially when that device isn’t managed by domain administrators.

This leads to our second problem.

A SteelHead appliance is normally managed by the network operations team, not domain administrators.

This poses a problem for the overall IT operational workflow. Normally, Tier 0 devices are managed by domain administrators.

Riverbed solves these problems by introducing a proxy in between the domain controller and SteelHead appliance. 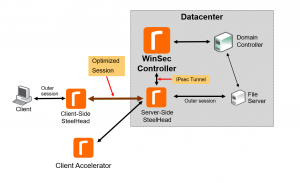 The WinSec Controller is a completely dedicated, non-network appliance that interacts with the domain controller as a Tier 0 entity. It isn’t used for unrelated daily network operations tasks, and it’s meant to be managed by a domain administrator.

Currently, the WinSec Controller has a physical form factor only, though there are plans to develop a virtual deployment option with complete feature parity.

SteelHead WAN Optimization appliances are the cornerstone of SMB traffic optimization. However, maintaining proper operational, administrative, and security workflows is also extremely important. The WinSec Controller gives us the opportunity to accommodate our Windows, systems, and security teams while at the same time providing the same level of optimization we’ve benefited from for years.

Watch the video below to learn more about Riverbed’s WinSec Controller solution.

This post was first first published on Riverbed Blog’s website by Phillip Gervasi. You can view it by clickinghere