The vulnerability, CVE-2021-1732, is a win32k window object type confusion leading to an OOB (out-of-bounds) write which can be used to create arbitrary memory read and write capabilities within the Windows kernel (local Elevation of Privilege (EoP)). Memory exploitation generally requires a read, write, and execute primitive to bypass modern exploit mitigations such as DEP, ASLR and CFG on hardened operating systems such as Windows 10. A data-only attack requires only a read and write primitive as it does not seek to execute malicious code in memory, but rather manipulates data structures used by the operating system to its advantage (i.e., to achieve elevated privileges).

In February 2021, the company Dbappsecurity discovered a sample in the wild that exploited a zero-day vulnerability on Windows 10 x64.

In this blog post, McAfee Advanced Threat Research (ATR) performed a deep dive into the analysis of the vulnerability, to identify the primitives for detection and protection. The exploit is novel in its use of a new win32k arbitrary kernel memory read primitive using the GetMenuBarInfo API, which to the best of our knowledge had not been previously known publicly.

Kernel exploits are usually the most sophisticated attack as they interact directly with the Windows kernel. When such attacks are successful, they are critical because they provide high privileges to the attacker, which can be used to increase the impact of the overall exploit chain. In this case the exploit is a Local Privilege Escalation (LPE) that targets 64-bit Windows 10 version 1909. The original sample discovered was compiled in May 2020 and reported to Microsoft in December 2020. While searching for additional findings we went through a public exploit published in March of 2021 by a researcher. Having this code publicly available may raise the potential for additional threat attackers. While we have not found clear evidence demonstrating malicious use of the proof-of-concept (POC), we did discover some variants being tested and uploaded to VirusTotal.

Before we dive into the details, we must give some background to win32k exploitation primitives which are used in the exploitation of CVE-2021-1732.

Exploitation of CVE-2021-1732 can be divided into six stages with the end goal of escalating a process’ privileges to System. The following diagram shows the stages.

Kernel user-mode callbacks have been well researched as far back as 2008 and 2010, with a very comprehensive analysis in 2011 by Mandt. A win32k kernel function such as xxxCreateWindowEx will make a callback function such as xxxClientAllocWindowClassExtraBytes through the user process PEB KernelCallbackTable.

Win32k is a Graphical (GUI) component of the Microsoft Windows Subsystem, most of which exists in the kernel for performance reasons. It is used for graphical print of the Windows OS desktop. However, due to the win32k architecture, the kernel component of win32k still needs to be able to make calls to user mode through user-mode callback functions to facilitate window creation and management.

Win32k has been one of the most exploited components in the Windows kernel accounting for 63% of vulnerabilities from 2010 to 2018, due to its large attack surface of syscalls relative to ntdll syscalls. Win32k vulnerabilities are generally turned into data-only attacks using a read/write kernel primitive by using a desktop object known as a tagWND data structure.

When the user-mode callback has completed, NtCallbackReturn executes and passes the expected return parameter back to the kernel. Due to the stateless nature of these callbacks, many vulnerabilities have been discovered related to the locking mechanisms on the objects leading to use-after-free (UAF) exploitation.

The tagWND data structure has two fields which make it a prime target for reading/writing within kernel memory; tagWND.cbWndExtra and tagWND.ExtraBytes. When a window is created using CreateWindowEx, it is possible to request additional bytes of memory directly after the tagWND object in memory through the cbWndExtra field in the WNDCLASSEXA structure when registering the window class.

There are two aspects to data-only attacks:

The number of extra bytes is controlled by the cbWndExtra field, and the allocated additional memory address is located at the ExtraBytes field. The read/write primitive is created as follows:

Prior to Windows RS4 it was trivial to leak tagWND kernel addresses using multiple techniques, such as calling HMValidateHandle to copy tagWND objects from the kernel to user desktop heap. The latest version of Windows 10 has been hardened against such trivial techniques.

Several primitives have been observed in the CVE-2021-1732 exploit used by the attackers; additionally, it is worth mentioning that some of them are new and not previously seen in the wild.

The following diagram shows the primitives used in CVE-2021-1732.

However, using the spmenu kernel address leak technique and relative tagWND desktop heap offsets, once a vulnerability is discovered to overwrite a tagWND.cbWndExtra field, it is possible to achieve kernel read/write capabilities without leaking the actual tagWND kernel addresses. The spmenu technique in this exploit was used here and here, but we are not aware of the GetMenuBarInfo API ever being used before in a win32k exploit.

In the context of a malicious process exploiting CVE-2021-1732, the above mitigations provide no protection. However, it does not impact Google Chrome as it disallows win32k calls (Windows 8 and higher), or Microsoft Edge as it applies win32k filtering on the relevant APIs.

Great work has been done to harden the security of win32k against EoP attacks with new and improved mitigations by the Microsoft OSR team, Mandt, Google Project Zero, Schenk and Dabah.  These mitigations include:

During the windows creation process (CreateWindowEx API) a callback named xxxClientAllocWindowClassExtraBytes is triggered to allocate space in the user mode desktop heap for the tagWND.ExtraBytes (offset 0x128) per the tagWND.cbWndExtra (offset 0xc8) value size (see figure 3 and 4 below for WND1).

Triggering the Vulnerability and Patch Analysis

When a window is created using CreateWindowEx API, a tagWND object is created by the Windows operating system. This window, as explained above, can be created with a parameter to allocate extra memory using cbWndExtra.

Per figure 6 above the following steps are required to trigger the vulnerability:

5. WND0 is then converted to a console window by calling NtUserConsoleControl which converts WND0.ExtraBytes from a user desktop heap pointer to an offset within the kernel desktop heap. This is needed later so that WND0 can write OOB to WND1.

The vulnerability lies in the fact that win32kfull!xxxCreateWindowEx does not check whether the window type has changed between the time it initiates the xxxClientAllocWindowClassExtraBytes and gets the response from NtCallbackReturn. 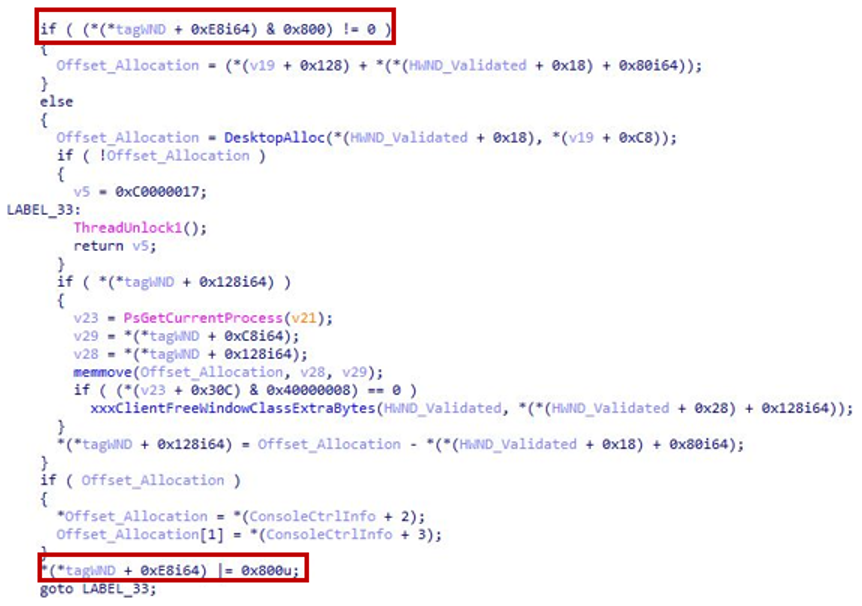 Figure 11 below shows that tagWND. ExtraBytes is initialized to zero within xxxCreateWindowEx during normal window creation.

The patched win32kfull.sys has updated xxxCreateWindowEx to now check the ExtraBytes initialized value before writing the returned value from user mode to tagWND. ExtraBytes (offset 0x128) per figure 10 below.

The vulnerability within the xxxCreateWindowEx API allowed the WND_Malicious.ExtraBytes field be to set to a value of WND0 offset within the kernel desktop heap. Now any time SetWindowLongW is called on WND_Malicious it will write to WND0. By supplying an offset of 0xc8, the function will overwrite the WND0.cbWndExtra field to a large value of 0XFFFFFFF per figures 13 and 14 below.

Figure 12 below shows that tagWND. ExtraBytes is initialized to the new offset value in the kernel desktop heap within xxxConsoleControl during console window creation. RedirectFieldpExtraBytes simply checks this initialized value to determine if the window type has changed. In addition, Microsoft have also added telemetry for detecting changes to the window type flag in the patched version.

Now that the WND0.cbWndExtra field has been set to a very large value (0xFFFFFFF), anytime SetWindowLongPtrA is called on WND0 it will write into the adjacent WND1 in kernel memory per figure 15 below. By writing to specific fields in WND1 we can create a kernel address memory leak as follows:

This means it can write beyond its tagWND structure and ExtraBytes in kernel memory to fields within WND1. In addition, WND0.ExtraBytes is also overwritten with the offset to itself so calls to SetWindowLongPtrA on WND0 will write to an offset in kernel desktop heap relative to the start of WND0.

As you can see from the xxxGetMenuBarInfo function in figures 21 and 22 below, by placing our leaked kernel address at the right location in our fake spmenu data structure we can create an arbitrary kernel memory read when calling GetMenuBarInfo.

Using the spmenu data structure kernel pointer leaked previously we can use the layout of this data structure and the GetMenuBarInfo API logic to turn it into an arbitrary kernel memory read per figures 18,19 and 20 below.

In this case the offset is 0x128 which is ExtraBytes. Then simply calling SetWindowLongPtrA on WND1 will write a specified value at the address placed in the WND1.ExtraBytes field. The arbitrary write is achieved because WND1 is a normal window (has not been converted to a console window like WND0 and WND_Malicious) and so will write to whatever address we place in WND1.ExtraBytes.

An arbitrary kernel write primitive can be easily achieved now by writing our destination address to WND1.ExtraBytes field by calling SetWindowLongPtrA on WND0 which will write OOB to WND1 relative to the offset we specify per figure 23 below

The original spmenu kernel address leaked previously has a pointer to WND1 at offset 0x50 per figures 24 and 25 below. Through multiple arbitrary reads using the GetMenuBarInfo on our fake spmenu data structure with this WND1 kernel address we can eventually read the PID 4 System EPROCESS token.

The arbitrary kernel read and write primitives can be combined to perform a data-only attack to overwrite a malicious process EPROCESS token with that of PID 4 which is System for an escalation of privilege (EoP).

The exploit then restores overwritten data structure values once the EoP is complete to prevent a BSOD (Blue Screen of Death).

By placing the destination address (malicious process EPROCESS token) at WND1.ExtraBytes then the subsequent call to SetWindowLongPtrA will write the value (PID 4 – System EPROCESS token) to that address per figures 26 and 27 below.

The win32k component has been hardened through great work by Microsoft against read/write primitives, but there are still opportunities for exploitation due to its large attack surface (syscalls and callbacks) and lack of win32k filtering on a process-wide basis. It would also be great to see a system wide win32k filtering policy capability within Windows 10.

In this report, we undertook a deep analysis of CVE-2021-1732 which is a Local Privilege Escalation on Windows 10. Windows kernel data-only attacks are difficult to defend against, as once a vulnerability is discovered they use legitimate and trusted code through specific APIs to manipulate data structures in kernel memory.

Patching is always the best solution for vulnerabilities, but a strong defense strategy such as threat hunting is also required where patching may not be possible, and to detect variants of vulnerabilities/exploits being used by campaigns.

This post was first first published on McAfee Enterprise – McAfee Blogs’s website by Eoin Carroll. You can view it by clicking here