Conti is a new family of ransomware observed in the wild by the Carbon Black Threat Analysis Unit (TAU). Unlike most ransomware, Conti contains  unique features that separate it in terms of performance and focus on network-based targets.

Conti uses a large number of independent threads to perform encryption, allowing up to 32 simultaneous encryption efforts, resulting in faster encryption compared to many other families.

Conti also utilizes command line options to allow for control over how it scans for data, suggesting that the malware may commonly be spread and directly controlled by an adversary. This control introduces the novel ability of skipping the encryption of local files and only targeting networked SMB shares, including those from IP addresses specifically provided by the adversary. This is a very rare ability that’s previously been seen with the Sodinokibi ransomware family.

Another new technique, documented in very few ransomware families, is the use of the Windows Restart Manager to ensure that all files can be encrypted. Just as Windows will attempt to cleanly shut down open applications when the operating system is rebooted, the ransomware will utilize the same functionality to cleanly close the application that has a file locked. By doing so, the file is freed up for encryption.

In many ways Conti is a  standard representation of modern ransomware. It iterates through files on the local system, and those on remote SMB network shares, to determine what data to encrypt. It then uses AES-256 encryption via a hard-coded public key, noted in the Appendix.

Conti begins to show its unique characteristics upon analysis, where it has multiple anti-analysis features to slow detection and reverse engineering. The primary form is the use of a unique string encoding routine that is applied to almost every string text used by the malware. In fact, it is used in 277 different algorithms – one per string. Almost 230 of these algorithms are placed in dedicated subroutines, ballooning the amount of code within the simple program. Examples are shown in the figures below.

Figure 1: Inline string deobfuscation for the mutex value of “_CONTI_” 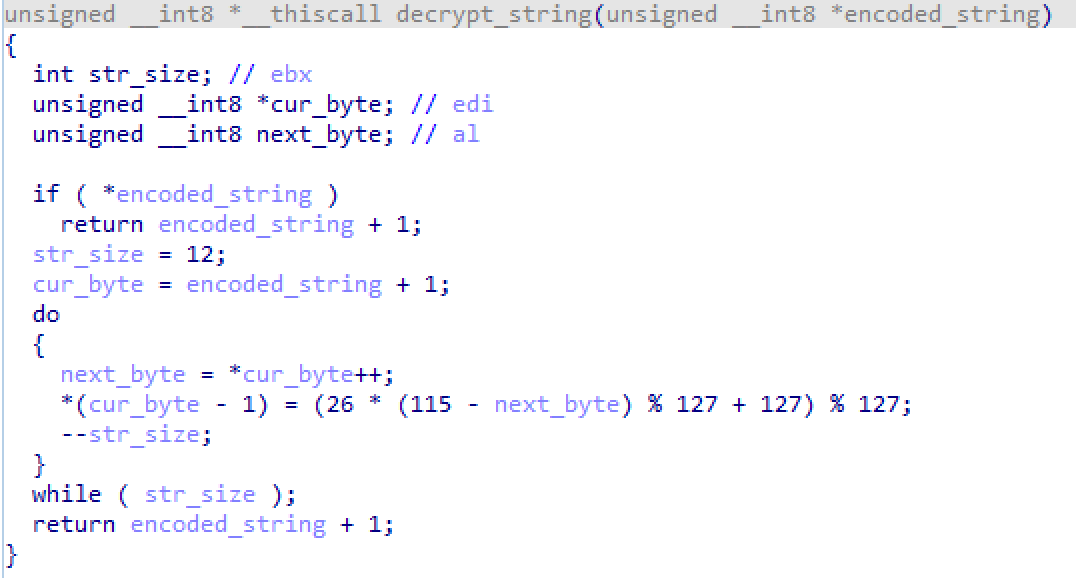 The most notable use for this obfuscation is to hide the various Windows API calls used by the malware. It is common for some malware to lookup these API calls during execution. As shown in the figure below, these routines are decoded on-the-fly, resolved to the actual API, and then stored into a global variable for later use elsewhere in the malware.

There are a small number of ransomware families that target the local network to encrypt via SMB. Conti’s very unique feature is that it allows command line arguments to direct it to encrypt the local hard drive or network shares, even specific, targeted, IP addresses.

From this functionality, it appears that Conti was designed, in part, to be executed directly by an adversary that is monitoring the environment. This is the opposite of ransomware that’s designed to be executed via an email attachment or drive-by download, in which the ransomware just executes independently. Conti does have the ability to be executed independently, with no interaction, in which case it will simply encrypt all local files and then any connectable network shares.

Additionally, the ransomware supports the “-h” command line argument that can point to a text file containing a list of network hostnames, each separated by a new line. This allows the ransomware to first iterate through hosts that it routinely connects to and then target specific machines elsewhere on the network as specified by the adversary.

The notable effect of this capability is that it can cause targeted damage in an environment in a method that could frustrate incident response activities. A successful attack may have destruction that’s limited to the shares of a server that has no Internet capability, but where there is no evidence of similar destruction elsewhere in the environment. This also has the effect of reducing the overall “noise” of a ransomware attack where hundreds of systems immediately start showing signs of infection. Instead, the encryption may not even be noticeable for days, or weeks, later once the data is accessed by a user.

Conti has an extremely busy and loud methodology for stopping services and inhibiting recovery on the local system. While many ransomware families will simply delete the Windows Volume Shadow Copies using vssadmin, Conti uses vssadmin in unique ways to ensure their deletion, shown below:

While the first vssadmin command is the most common one used by ransomware, the remainder are fairly unique and seen in few ransomware families.

Additionally, the malware will execute 160 individual commands – 146 of which focused on stopping potential Windows services. These commands are noted in the Appendix and include commands such as those in the figure below. The entirety of commands greatly mimics those that are also found within the Ryuk ransomware family.

Figure 5: Sample set of services being stopped by Conti

Finally, the malware will enumerate through all open processes to search for any that have the string “sql” in their process name. If so, it will terminate the process before continuing, as shown in the figure below. 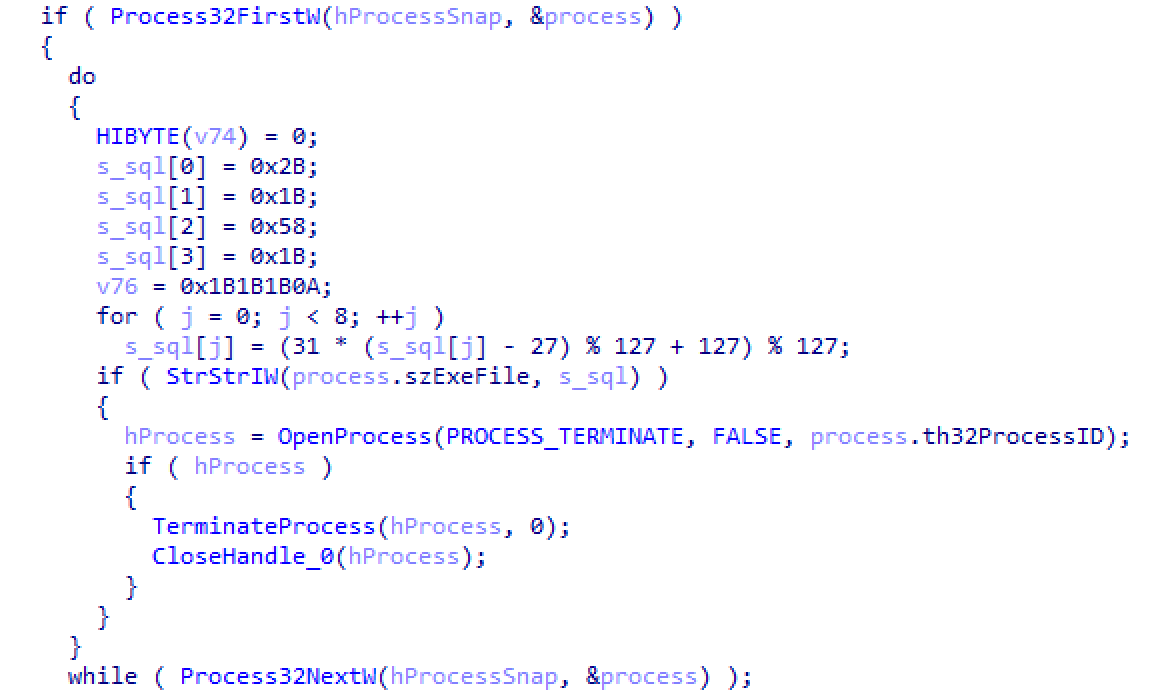 Figure 6: Code for searching for terminating any process containing “sql”

Unlike many families of ransomware, Conti does not target a specific list of files based upon their extension. It performs the opposite method where it will encrypt all files except those with the extensions of: exe, dll, lnk, and sys.

The malware will then build a list of folders for it to ignore while encrypting, noted in the figure below. If these values are found anywhere in the file name or path, it will skip encryption within it.

Figure 7: List of keywords to ignore files and folder to encrypt

Additionally, the malware will search for a predefined list of files to ignore that is stored within the malware as a resource. This data is stored under the value of the resource “102,”, which was set to “null” in the analyzed sample. While the ransomware is enumerating files, it will refer to this value to look for a comma-delimited string. If found, it will parse each entry and skip the file if the file path contains that specific keyword.

The use of the Windows Restart Manager in ransomware is a new and unique technique. We’ve previously documented this in our analysis of Medusa Locker. The Restart Manager is a component of Windows that many users take for granted. Upon restarting the computer, it will attempt to gracefully close all running applications and open files. If there are files currently open, and unsaved, it will attempt to alert the user to save their data. After a certain amount of time, however, the executable will close. Once all open files are closed, Windows will continue to restart.

While Windows does this on the entire system for restarting, Restart Manager can also be controlled by an application to close and unlock specific files. For each file to be encrypted, Conti will process that file through the Restart Manager to ensure that it is unlocked and open for encryption, maximizing the amount of damage it does.

Once the system has been prepared and files have been identified, Conti will begin the process of iterating through each folder, creating a ransom note, and encrypting files to have a file extension of “.CONTI”.

The ransom note, named CONTI_README.txt, is retrieved from the executable’s resources as shown earlier. Its status as a resource allows the adversary to quickly change the note on-the-fly without recompiling the executable.

While Conti uses a traditional method of encryption, AES-256 encryption via a hard-coded public key, one unique factor is how it can thread the encryption of files that emphasizes performance. This allowed it to encrypt files dozens of times faster than a typical ransomware application.

This is seen by using the APIs that utilize Windows I/O Completion Ports. Conti has an encryption “worker” thread that is focused on performing encryption on a given filename. The malware uses the CreateIoCompletionPort() call to create 32 instances of this worker thread into memory to wait for data. Once the list of files has been created, they are fed to the threads for immediate encryption.

Figure 10: Line of code for creating 32 simultaneous threads for encryption

The malware then uses the PostQueuedCompletionStatus() call to pass the path of the file to be encrypted into the thread. GetQueuedCompletionPort() to receive the results of the thread and finalize the encryption.

If the malware is set to encrypt the network shares, it will perform just a few different operations. This starts with determining if the “-h” command line argument was used to provide a list of hostnames to process. If so, those hosts are immediately scanned with the NetShareEnum() API call to determine if they have open SMB network shares. If so, those shares are reviewed for files to encrypt. 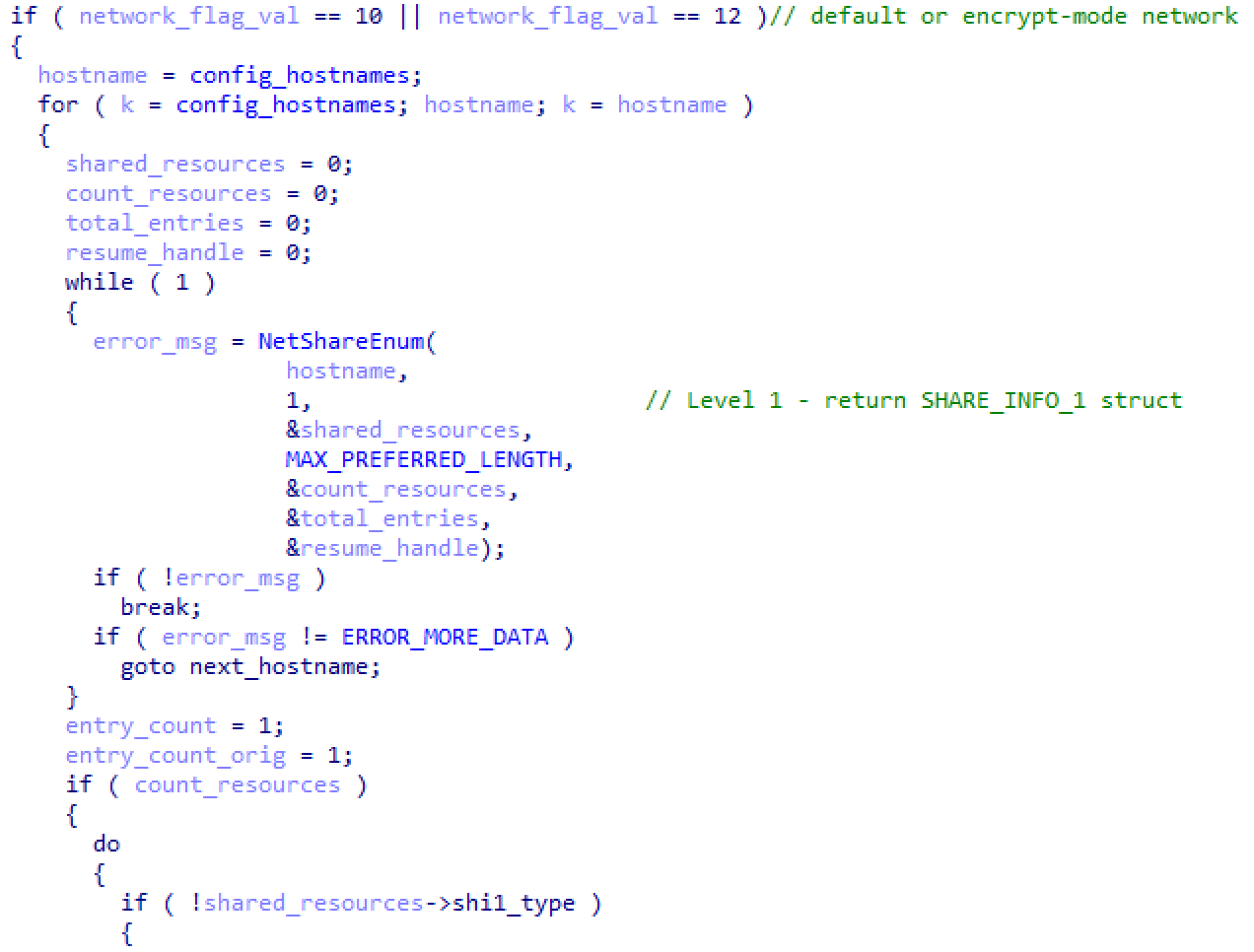 The malware will then retrieve the ARP cache from the local system by using the GetIpNetTable() API call. This will return a list of all systems the computer was recently communicating with, andwith and is equivalent to running the “arp -a” command. In this manner, Conti avoids a very noisy scan of the entire network by focusing only on systems that the victim normally connects to.

Figure 13: Code used to collect the contents of the local ARP cache

Once the ARP cache is acquired, Conti will perform one more set of checks to ensure that the IP addresses it connects to begin with either “172.”, “192.168.”, or “10.”. These prefixes specify the most common IP address ranges for local, non-Internet, systems. Any other IP address is discarded, unless it was specifically set in the optional hosts file.

Once the remote machines have been assessed, Conti will then create a similar approach of encryption as local files by using 32 threads to enumerate through each share and encrypt data.

Overall, Conti represents a unique twist in modern ransomware. We have tracked numerous families that are designed to be driven by the adversary while on the network, with access gained through weak RDP access or vulnerable Internet-facing services. Conti shows an intention behind the actor to also respond to reconnaissance to determine worthwhile servers in the environment that are sensitive to data encryption. It’s implementation of multi-threaded processing, as well as the use of the Windows Restart Manager, shows a feature of incredibly quick, and thorough, encryption of data. The use of large-scale service termination supports this with a focus on targeting a vast array of applications that can be found all across the small business and enterprise fields.