To SDB, Or Not To SDB: FIN7 Leveraging Shim Databases for Persistence

In 2017, Mandiant responded to multiple incidents we attribute to FIN7, a financially motivated threat group associated with malicious operations dating back to 2015. Throughout the various environments, FIN7 leveraged the CARBANAK backdoor, which this group has used in previous operations.

A unique aspect of the incidents was how the group installed the CARBANAK backdoor for persistent access. Mandiant identified that the group leveraged an application shim database to achieve persistence on systems in multiple environments. The shim injected a malicious in-memory patch into the Services Control Manager (“services.exe”) process, and then spawned a CARBANAK backdoor process.

Mandiant identified that FIN7 also used this technique to install a payment card harvesting utility for persistent access. This was a departure from FIN7’s previous approach of installing a malicious Windows service for process injection and persistent access.

According to Microsoft, an application compatibility shim is a small library that transparently intercepts an API (via hooking), changes the parameters passed, handles the operation itself, or redirects the operation elsewhere, such as additional code stored on a system. Today, shims are mainly used for compatibility purposes for legacy applications. While shims serve a legitimate purpose, they can also be used in a malicious manner. Mandiant consultants previously discussed shim databases at both BruCon and BlackHat.

There are multiple ways to register a shim database on a system. One technique is to use the built-in “sdbinst.exe” command line tool. Figure 1 displays the two registry keys created when a shim is registered with the “sdbinst.exe” utility.

Figure 2: Excerpt from a FIN7 PowerShell script to install a custom shim

FIN7 used various naming conventions for the shim database files that were installed and registered on systems with the “sdbinst.exe” utility. A common observance was the creation of a shim database file with a “.tmp” file extension (Figure 3).

Upon registering the custom shim database on a system, a file named with a random GUID and an “.sdb” extension was written to the 64-bit shim database default directory, as shown in Figure 4. The registered shim database file had the same MD5 hash as the file that was initially created in the “C:WindowsTemp” directory.

In addition, specific registry keys were created that correlated to the shim database registration. Figure 5 shows the keys and values related to this shim installation. 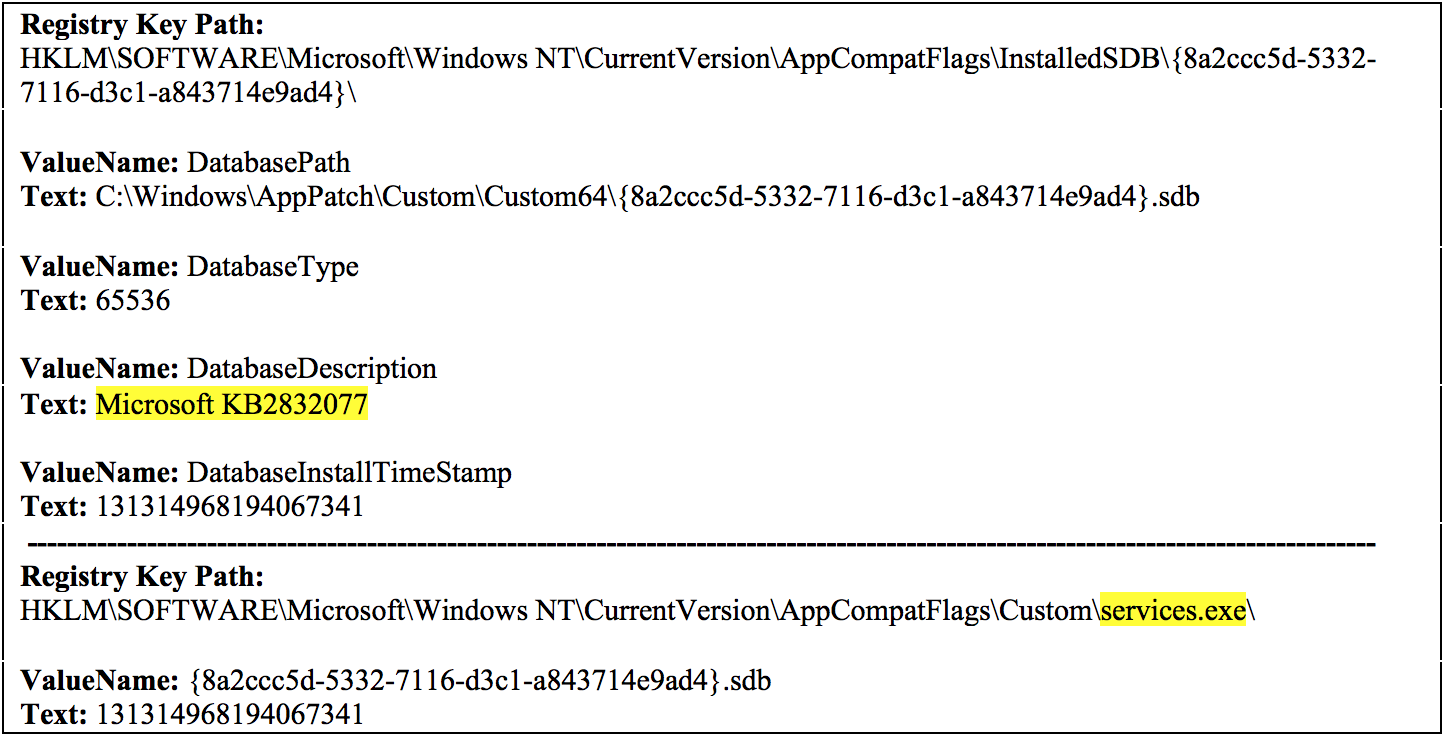 The database description used for the shim database registration, “Microsoft KB2832077” was interesting because this KB number was not a published Microsoft Knowledge Base patch. This description (shown in Figure 6) appeared in the listing of installed programs within the Windows Control Panel on the compromised system.

During the investigations, Mandiant observed that FIN7 used a custom shim database to patch both the 32-bit and 64-bit versions of “services.exe” with their CARBANAK payload. This occurred when the “services.exe” process executed at startup. The shim database file contained shellcode for a first stage loader that obtained an additional shellcode payload stored in a registry key. The second stage shellcode launched the CARBANAK DLL (stored in a registry key), which spawned an instance of Service Host (“svchost.exe”) and injected itself into that process.

Figure 7 shows a parsed shim database file that was leveraged by FIN7. 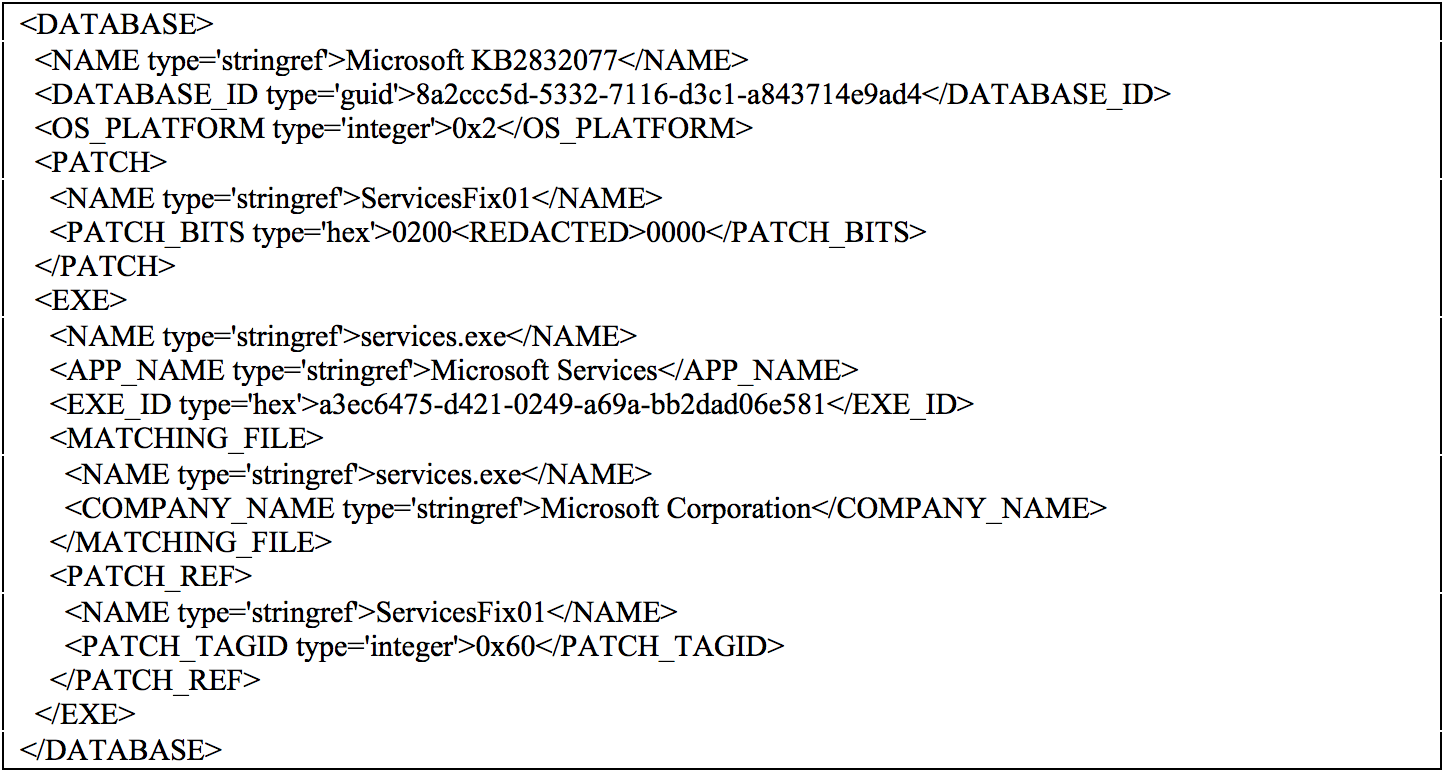 For the first stage loader, the patch overwrote the “ScRegisterTCPEndpoint” function at relative virtual address (RVA) “0x0001407c” within the services.exe process with the malicious shellcode from the shim database file.

The new “ScRegisterTCPEndpoint” function (shellcode) contained a reference to the path of “REGISTRYMACHINESOFTWAREMicrosoftDRM”, which is a registry location where additional malicious shellcode and the CARBANAK DLL payload was stored on the system.

Figure 8 provides an excerpt of the parsed patch structure within the recovered shim database file.

The shellcode stored within the registry path “HKLMSOFTWAREMicrosoftDRM” used the API function “RtlDecompressBuffer” to decompress the payload. It then slept for four minutes before calling the CARBANAK DLL payload’s entry point on the system. Once loaded in memory, it created a new process named “svchost.exe” that contained the CARBANAK DLL.

Figure 9 provides a high-level overview of a shim database being leveraged as a persistent mechanism for utilizing an in-memory patch, injecting shellcode into the 64-bit version of “services.exe”. 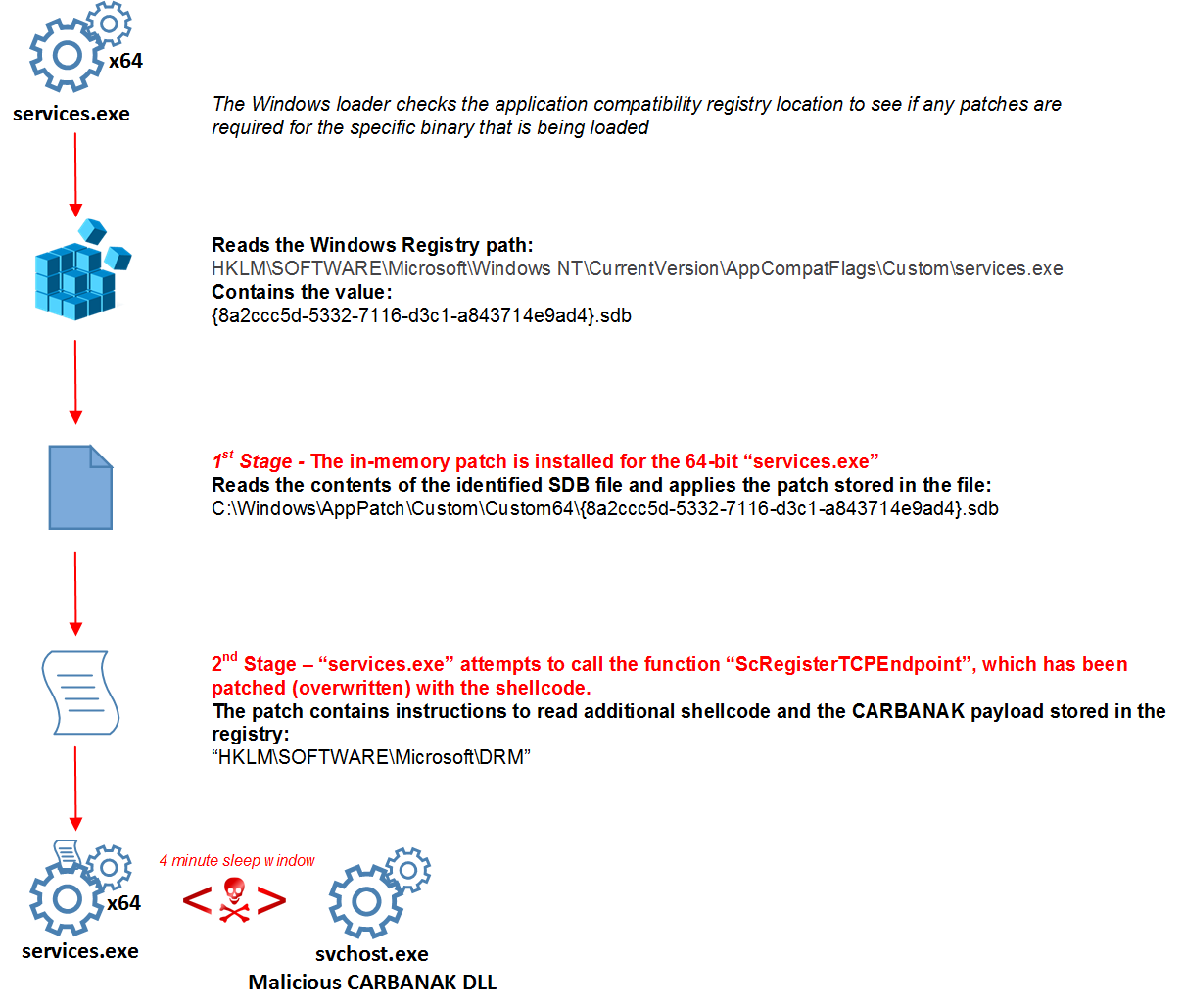 Mandiant recommends the following to detect malicious application shimming in an environment: