Social Media: Where Cybercrime Lurks in the Shadows

When you think of cybercrime, the first thing that comes to mind is most likely cybercriminals operating on the dark web. Last year, however, cybercriminals made the jump over to social media and cashed in big – $3 billion worth, as a matter of fact.

With approximately 2.77 billion people using one social media account or more, it’s no wonder these bad actors have followed the masses. While the average user distrusts the dark web, they do trust their chosen social media platforms. Whether it’s sharing birthdates or a current location, or accepting a follow or message request from strangers, users in front of a screen feel secure. Although, as the line between social platforms and the dark web quickly blurs, the events behind the screen are the real issue. 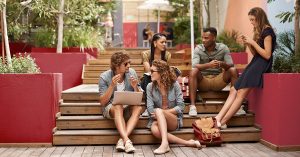 Since 2017, cryptomining malware has exploded on a global scale, with over half of the identified strains found on social media sites. Utilizing apps, advertisements, and malicious links, cybercriminals were able to deliver these attacks and earn $250 million per year. Not only are social media platforms being used to distribute cryptomining malware, but they are also used as a major source for spreading other types of malware – malvertisments, faulty plug-ins, and apps – that draw users in by offering “too good to be true” deals. Once clicked on, the malware attacks. From there, cybercriminals can obtain data, establish keyloggers, dispense ransomware, and lurk in the shadows of social media accounts in wait for the next opportunity.

That next opportunity could also be on a completely different social media platform. As these sites unknowingly make it easier for malware to spread from one site to another. Many social media accounts interconnect with one another across platforms, which enables “chain exploitation,” or where malware can jump from one account to the next.

In short, social media is a cash cow for cybercriminals, and they are showing no sign of slowing down. What it really comes down to is social platforms, like Instagram and Facebook, attract a significant number of users and are going to draw in a criminal component too. However, if you take the proper security precautions ahead of time, you can fight off bad actors and continuously scroll with confidence. Here are some tips to help you get started:

The post Social Media: Where Cybercrime Lurks in the Shadows appeared first on McAfee Blogs.