As 2018 came to a close, I stopped to reflect about the various threats we saw this year – particularly in Europe. While Europe continued to struggle with targeted attacks from organized cyber criminal groups and cyber espionage groups, there was yet another threat that we observed challenging numerous organizations in nearly every industry. Some may think the answer is ransomware. Sure, ransomware continues to be a threat, but we have actually observed a continued decrease in ransomware detections. This is a trend that started back in late 2017 and has been fairly consistent.

Credential Theft Malware vs Other Categories

By analyzing threat detections from our Dynamic Threat Intelligence (DTI) for Jan. 1, 2018, to Dec. 31, 2018, we can see that nearly 50 percent of all detected threats in Europe were within the category of credential theft malware (Figure 1). The data includes detections from both FireEye email and network appliances. 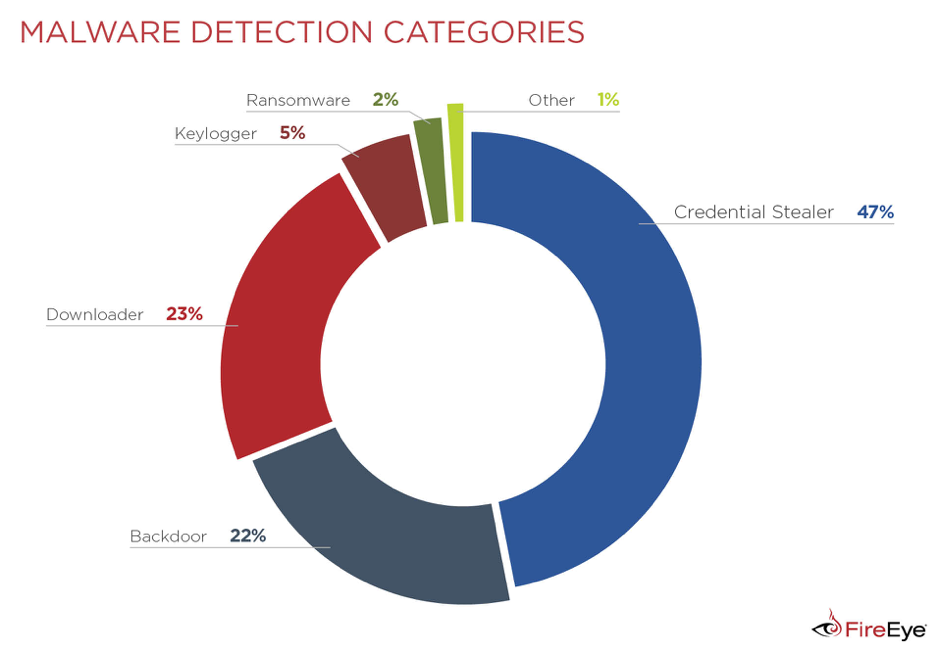 An Emerging Challenge in Europe

Credential theft malware is certainly a global problem and organizations from all across the world are at risk, but in Europe and especially for members of the European Union (EU), it is a particularly tough challenge and something to keep in mind for 2019. One reason is the EU’s continued, long-time focus on digitalization. These digitalization initiatives focus on a variety of categories, ranging from ensuring high-speed connectivity for EU citizens to how EU citizens interact with their governments, as well as the possibilities for EU enterprises and citizens to do business online.

From a threat perspective, the improved connectivity expands the surface area for cyber threats, but more critical, the continued expansion within Digital Public Services could potentially be an area of interest when it comes to stealing credentials and potential sensitive information submitted via government web-portals.

Previously we had observed credential theft malware primarily targeting customers within the financial services industry; however, this uptick in credential theft malware use throughout 2018 could potentially mean that we will see a scenario where credentials for EU centric systems – such as government, healthcare, payroll systems, and other sensitive systems – will be adopted in future malware configuration files. Some other things to note:

In our M-Trends 2018 report, we also cover the lack of basic security fundamentals, where identity and access management is still a challenge for many organizations. The fact that many have yet to implement multi-factor authentication will only make it easier for threat actors and malware to efficiently harvest credentials, which could allow access to sensitive systems.

Throughout the years, we have published numerous reports and blog posts on how threat actors – from organized cyber criminals to espionage groups – have utilised legitimate credentials in their cyber attacks. Here are a few examples:

While other malware categories such as ransomware tend to steal most headlines, I believe that organizations and governments need to be more aware of the threat posed by credential theft malware. While it is a global threat, it is particularly problematic in Europe, especially considering the fast-paced digitalization strategies. Ultimately, EU organizations cannot neglect the value credentials have in cyberspace, and therefore must make sure to factor in the risks on how stolen credentials can be misused in both sensitive and non-sensitive communications.