Is There Really Such a Thing as a Low-Paid Ransomware Operator?

Lurking in the shadows of every large-scale attack by organized gangs of cybercriminals, however, there can be found a multitude of smaller actors who do not have access to the latest ransomware samples, the ability to be affiliates in the post-DarkSide RaaS world or the financial clout to tool up at speed. 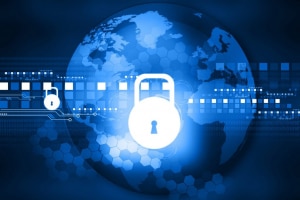 Going by recent headlines you could be forgiven for thinking all ransomware operators are raking in millions of ill-gotten dollars each year from their nefarious activities.

By getting creative and looking out for the latest malware and builder leaks they can be just as devastating to their victims and, in this blog, we will track the criminal career of one such actor as they evolve from homemade ransomware to utilizing major ransomware through the use of publicly leaked builders.

So what is a low-paid ransomware operator to do in such circumstances?

With the income of such tactics sometimes running into the millions of dollars, such as with the Netwalker ransomware that generated 25 million USD between 1 March and 27 July 2020, we speculate that much of those ill-gotten funds are subsequently used to build and maintain arsenals of offensive cyber tools, allowing the most successful cybercriminals to stay one step ahead of the chasing pack

The Rich Get Richer

For years, the McAfee Enterprise Advanced Threat Research (ATR) team has observed the proliferation of ransomware and the birth and (apparent) death of large organized gangs of operators. The most notorious of these gangs have extorted huge sums of money from their victims, by charging for decryption of data or by holding the data itself to ransom against the threat of publication on their ‘leak’ websites.

For smaller ransomware operators, who do not have affiliation with a large group, the technical skills to create their own devastating malware or the financial muscle to buy what they need, the landscape looks rather different.

As seen in the image above, cybercriminals with access to underground forums and deep pockets have the means to pay top dollar for the tools they need to continually generate more income, with this particular Babuk operator offering up 50,000 USD for a 0-day targeting a corporate virtual private network (VPN) which would allow easy access to a new victim.

Away from the gaze of researchers who typically focus on the larger ransomware groups, many individuals and smaller groups are toiling in the background, attempting to evolve their own operations any way they can. One such method we have observed is through the use of leaks, such as the recent online posting of Babuk’s builder and source code.

Unable to build equally effective attack chains, from initial access through to data exfiltration, their opportunities to make illegal profits are far slimmer in comparison to the behemoths of the ransomware market. 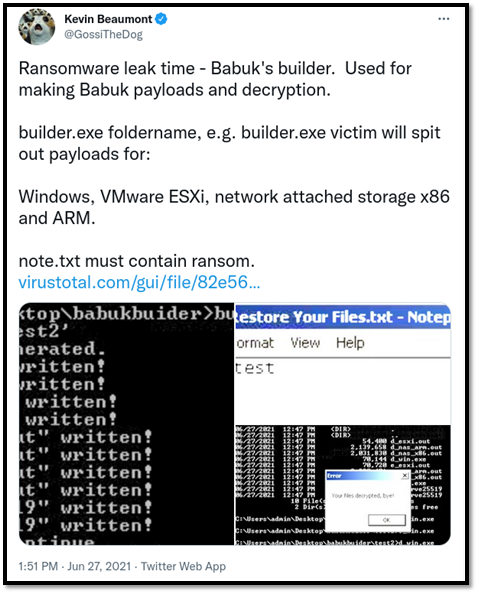 Thus, even those operators at the bottom of the ransomware food chain have the opportunity to build on others’ work, to stake their claim on a proportion of the money to be made from data exfiltration and extortion.

McAfee Enterprise ATR has seen two distinct types of cybercriminal taking advantage of leaks such as this. The first group, which we presume to be less tech-savvy, has merely copied and pasted the builder, substituting the Bitcoin address in the ransom note with their own. The second group has gone further, using the source material to iterate their own versions of Babuk, complete with additional features and new packers.

From a quick glance at the sample we can deduce that it is a copied and pasted binary output from Babuk’s builder, with an edited ransom note naming the version “Delta Plus”, two recovery email addresses and a new Bitcoin address for payments:

A Yara rule dedicated to Babuk ransomware triggered a new sample uploaded on VirusTotal, which brings us to our ‘lowly-paid’ ransomware actor.

Figure 4: Strings content of “Delta Plus” named version of Babuk 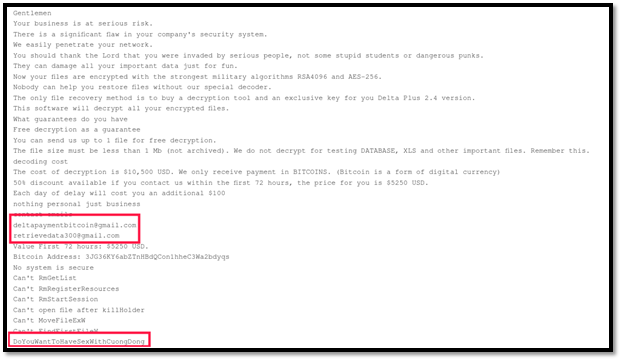 The first email address, retrievedata300@gmail.com, has been used to drop a .NET ransomware mentioning “Delta Plus”:

We’ve seen the two email recovery addresses before – they have been used to deliver random ransomware in the past and, by using them to pivot, we were able to delve into the actor’s resume: 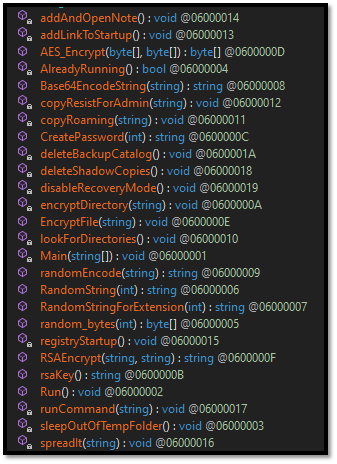 The ransomware is pretty simple to analyze; all mechanisms are declared, and command lines, registry modification, etc., are hardcoded in the binary.

By way of contrast, their new project is well developed, easy to use and efficient, no to mention painful to analyze (as it is written in the Golang language) and provides executables for Windows, Linux and network attached storage (NAS) systems.

In fact, the actor’s own ransomware is so poorly developed (no packing, no obfuscation, command lines embedded in the binary and the fact that the .NET language is easy to analyze) that it is hardly surprising they started using the Babuk builder instead.

The second email address, deltapaymentbitcoin@gmail.com, has been used to drop an earlier version of the .NET ransomware

By checking the relationships between “Delta ransomware”, the Babuk iteration and the domains contacted during process execution, we can observe some domains related to our sample: 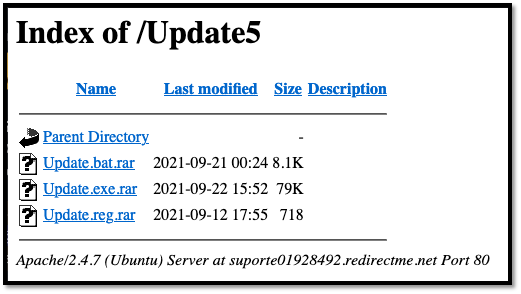 Thanks to a misconfiguration, files hosted on those two domains are accessible through Open Directory (OpenDir), which is a list of direct links to files stored on a server: 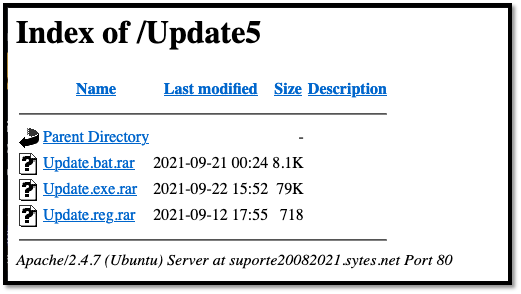 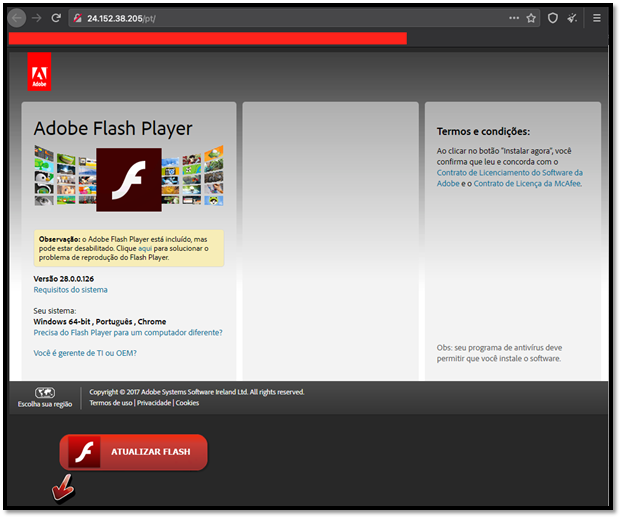 Other domains where files are hosted contain different tools used during attack operations:

When logging in, the website warns you that your Flash Player version is outdated and tries to download the Fake Flash Player installer:

A secondary site appears to have also been utilized in propagating the fake Flash Player, though it is currently offline : 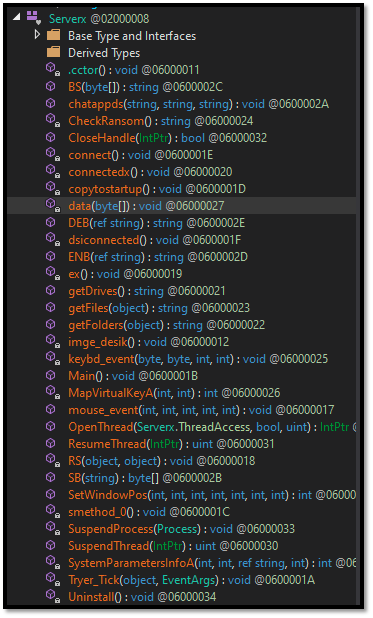 By looking at this IP with Shodan, we can get a dedicated hash for the SSH service, plus fingerprints to use on this IP, and then find other IPs used by the actor during their operations.

At least 174 IPs are sharing the same SSH pattern (key, fingerprint, etc.); all findings are available in the IOCs section.

By using this hash, we were able to map the infrastructure by looking for other IPs sharing the same SSH key + fingerprintings.

Most of the ransomware samples used by the actor mention different Bitcoin (BTC) addresses which we assume is an effort to obscure their activity.

From the three samples we researched, we were able to extract the following BTC addresses:

By looking for transactions between those BTC addresses with CipherTrace, we can observe that all the addresses we extracted (see the circle highlighted with a yellow “1” below) from the samples we’ve found are related and eventually point to a single Bitcoin wallet, probably under control of the same threat actor.

While their activity to date suggests a low level of technical skill, the profits of their cybercrime may well prove large enough for them to make another level jump in the future.

Ransomware Isn’t Just About Survival of the Fittest

As we have seen above, our example threat actor has evolved over time, moving from simplistic ransomware and demands in the hundreds of dollars, to toying with at least two builder leaks and ransom amounts in the thousands of dollars range.

In the meantime, such opportunitistic actors will continue to bait their hooks and catch any fish they can as, unlike affiliated ransomware operators, they do not have to follow any rules in return for support (pentest documentation, software, infrastructure, etc.) from the gang’s operators. Thus, they have a free hand to carry out their attacks and, if a victim wants to bite, they don’t care about ethics or who they target.

Even if they stick with copy-pasting builders and crafting ‘stagers’, they will have the means at their disposal to create an efficient attack chain with which to compromise a company, extort money and improve their income to the point of becoming a bigger fish in a small pond, just like the larger RaaS crews.

The good news for everyone else, however, is the fact that global law enforcement isn’t gonna need a bigger boat, as it already casts its nets far and wide.

The post Is There Really Such a Thing as a Low-Paid Ransomware Operator? appeared first on McAfee Blogs.

This post was first first published on McAfee Enterprise – McAfee Blogs’s website by Thibault Seret. You can view it by clicking here