The terms ‘data sovereignty’, ‘data residency’ and ‘data localization’ are a source of confusion for most people. They are effectively three degrees of a single concept: how data privacy impacts cross-border data flows. This subject has become increasingly important following the Schrems II decision and its requirement that organizations when processing personal data must ensure their privacy is not put at risk and subject to governmental surveillance when shared across borders. 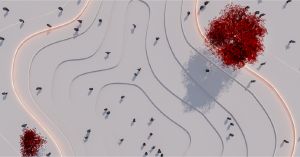 In the wake of the Schrems II decision[1], and even more in the light of Friday’s Facebook ruling[2], the question on everyone’s mind is how to truly protect personal data from the prying eyes of national security agencies around the world. Despite detailed guidelines[3] issued in November 2020, in the absence of new definitive guidelines for transferring data across European borders[4], many are starting to wonder whether data localisation is the magic bullet to protect personal data.

Data sovereignty differs from data residency in that not only is the data stored in a designated location, but it is also subject to the laws of the country in which it is physically stored. This difference is crucial, as there will be different privacy and security requirements depending on where the data centres physically sit. From a legal perspective, the difference is important because a government’s data access rights vary from country to country.

Data residency refers to the country where an organisation specifies that its data is stored, usually for regulatory or policy reasons. A common data residency requirement example is for tax purposes: to prove an organisation conducts a greater portion of its business in a given country, it will put in place an infrastructure that requires a strict data management in order to protect its taxation rights.

In the post-Schrems II world, some organisations have taken the view that the GDPR requires hard data localisation. The question is then whether such practices are realistic, and whether they offer similar privacy protection to that of the GDPR.

Data localisation is the most stringent concept of the three, which is the reason why it is often referred to as “hard data localisation”. It requires that data created within certain borders stay within them and is almost always applied to the creation and storage of personal data, without exception. A good example is Russia’s On Personal Data Law (OPD-Law), which requires the storage, update and retrieval of data on its citizens to be limited to data center resources within the Russian Federation.

The cost of operating a localised service must also be factored in, including support, engineering (e.g. development, debugging and maintenance), and backup (e.g. redundancy) costs. So, whilst the creation of local infrastructure may in the short-term imply jobs for local economies, the reality is that given there are often fully automated, the jobs and investment dividend may be short-lived.

What are the implications of hard data localisation?

Data localisation runs counter to the principles of cloud computing (and the internet) – allowing the free flow of data for the greatest use. It is also potentially contrary to the principles of free movement of data under EU law[5]. The Internet is global and beyond the Internet, most companies operate in an integrated global environment, bearing in mind that “remote access by an entity from a third country to data located in the EEA is also considered a transfer.”[6].

You have probably heard of the Five EYES, Nine EYES, and Fourteen EYES Alliances. If not, these are all about intelligence sharing agreements. Initially, the Five Eyes Alliance arose out of the cold war era and was a pact between the United States and the UK aimed at decrypting Soviet Russian intelligence. By the late 1950s, Canada, Australia, and New Zealand also joined the Alliance. These five English-speaking countries are the Five Eyes Alliance. On top of this alliance, two other international intelligence-sharing agreements are publicly known: the Nine Eyes (Five Eyes + Denmark, France, Holland, Norway) and the Fourteen Eyes Alliances (Nine Eyes + Germany, Belgium, Italy, Sweden, Spain).

Data localisation is also often touted as a mean to shield European citizen data from 3rd country government surveillance in particular US Government access under the CLOUD Act. While localisation does offer some protections (i.e. from transfer of data out of the territory), it does not automatically mean that data will be protected adequately in country. For example, data localisation does not mean that appropriate encryption standards are met, nor does it mean that there is no local surveillance – even in adequate countries[7].

The truth is once this very obvious statement is said, the question still remains wide open for many valid reasons. VPNs are international operations, meaning effectively, any organisation operating in a given country may be liable to that country’s law enforcement, whether by treaty, or by any other type of court orders. If a country does not have a general treaty and is not part of 5/9/14 eyes, there’s nothing stopping one country from putting political pressure on the other (sanctions, for example) to get what they want. Additionally, operating in a given country, for instance Panama, does not mean a country will refuse to cooperate with another country’s authorities, such as Canada.

With this in mind, some companies argue, without evidence, that by doing business from a given jurisdiction, they are able to offer more adequate protection against surveillance. And without much surprise, not one country, even within the European Union, offers the same level of protection against surveillance, and the US’ surveillance activity isn’t much more extensive than other countries viewed as providing adequate protection.[8] Let’s take for instance the use of a VPN to protect privacy. Many providers argue that choosing a VPN outside the 5/9/14 Eyes countries may offer further protection.

Now, once all of the above is said, it must be kept in mind that just because being anonymous is impossible, that you shouldn’t still try to protect your personal data as much as possible, or request companies to strictly comply with data minimization principles. All in all, governments would not have access to so much data if companies were not holding themselves so much data. Data minimization ends up being not only a good tool for increasing security, since attackers can’t steal what you don’t have, but also because it could potentially help people decrease the costs of data redundancy, storage, etc.

There is little chance to find one country that is completely immune to data access laws in one way or the other, and nothing can stop one country from putting pressure on another one to obtain what it wants. That works for companies as well. For instance, Microsoft recently announced that it has “answered Europe’s call,”[9] but it cannot reject a request based on the CLOUD Act, and the compensation offered by Microsoft for a violation of the GDPR is not equivalent to the recourse to an available judicial remedy as requested under the Schrems II decision.

What are the implications for cybersecurity?

In 2020, the Internet Society penned a report on the implication of data localisation for cybersecurity that has much merit, and stated that “Cybersecurity may suffer as organizations are less able to store data outside borders with the aim of increasing reliability and mitigating a wide variety of risks including cyber-attacks and national disasters.”[10]

Some also argue that data localisation interferes with fraud prevention. For example, the inability to mirror data across several data centers can prevent the provider from seeing patterns and trends of fraud or other risks.

This train of thought also applies to the selling of data to unsecure third parties within the same region or preventing unauthorised access to the data gained by third parties.

Data localisation may be presented by some as a magic bullet, but the complete implications are yet to be fully understood. Hence policies or commercial practices requiring forced data localisation must be thought through carefully as they can impact the free flow of data, can comprise the ability to scale platforms and services for global customers in addition to the many cybersecurity harms that may impact operational effectiveness.

Disclaimer: This blog reflects the authors’ personal opinions. Any statements, opinions, and any errors are the authors’ own and not those of McAfee. The statements in this blog do not constitute legal advice, and each company must determine for itself its obligations under all laws. Nothing herein establishes an attorney-client relationship.

[2] The EU-U.S. Data Transfer Problem Is Bigger Than Most People Realise (linkedin.com)

[3] Recommendations 2020/1 and 2020/2 of the EDPB – https://edpb.europa.eu/sites/default/files/consultation/edpb_recommendations_202001_supplementarymeasurestransferstools_en.pdf

[5] The European Parliament considers “the free movement of data as the Fifth Freedom in the single market after the free movement of persons, goods, services and capital” – Morrison Foerster Client Alert “New EU Regulation to Strengthen the Free Movement of Data 06 Nov 2018” https://www.mofo.com/resources/insights/181106-eu-regulation-data-movement.html

[7] For example, French surveillance laws authorises surveillance not only to combat terrorism and other criminal offences, but also to protect France’s major economic, industrial, and scientific interests.

Canada is part of the 5 Eyes but has repeatedly demonstrated its commitment to free and unrestricted internet access and has strong protections for freedom of speech and press, and the government has expressed support for net neutrality. Iran is not part of any of the know alliances. However, VPN providers are required to request government approval before providing their services, and people accessing the international internet network using VPNs without such government approval risk up to 1 year of prison time.

This post was first first published on Enterprise – McAfee Blogs’s website by Roy Kamp. You can view it by clicking here