When Daniel Bohannon released his excellent DOSfuscation paper, I was fascinated to see how tricks I used as a systems engineer could help attackers evade detection. I didn’t have much to contribute to this conversation until I had to analyze a hideously obfuscated batch file as part of my job on the FLARE malware queue.

Previously, I released flare-qdb, which is a command-line and Python-scriptable debugger based on Vivisect. I previously wrote about how to use flare-qdb to instrument and modify malware behavior. Flare-qdb also made a guest appearance in Austin Baker and Jacob Christie’s SANS DFIR Summit 2017 briefing, inducing the Windows event log service to exclude process creation events. In this blog post, I will show how I used flare-qdb to bring “script block logging” to the Windows command interpreter. I will also share an Easter Egg that I found by flipping only a single bit in the process address space of cmd.exe. Finally, I will share the script that I added to flare-qdb so you can de-obfuscate malicious command scripts yourself by executing them (in a safe environment, of course). But first, I’ll talk about the analysis that led me to this solution.

Figure 1 shows a batch script (MD5 hash 6C8129086ECB5CF2874DA7E0C855F2F6) that has been obfuscated using the BatchEncryption tool referenced in Daniel Bohannon’s paper. This file does not appear in VirusTotal as of this writing, but its dropper does (the MD5 hash is ABD0A49FDA67547639EEACED7955A01A). My goal was to de-obfuscate this script and report on what the attacker was doing.

This 165k batch file is dropped as C:WindowsTempXYNT.bat and executed by its dropper. Its commands are built from environment variable substrings. Figure 2 shows how to use the ECHO command to decode the first command.

The script uses hundreds of commands to set environment variables that are ultimately expanded to de-obfuscate malicious commands. A tedious approach to de-obfuscating this script would be to de-fang each command by prepending an ECHO statement to print each de-obfuscated command to the console. Unfortunately, although the ECHO command can “decode” each command, BatchEncryption needs the SET commands to be executed to decode future commands. To decode this script while allowing the full malicious functionality to run as expected, you would have to iteratively and carefully echo and selectively execute a few hundred obfuscated SET commands.

The irony of BatchEncryption is that batch scripts are viewed as being easy to de-obfuscate, making binary code the safer place to hide logic from the prying eyes of network defenders. But BatchEncryption adds a formidable barrier to analysis by its extensive, layered use of environment variables to rebuild the original commands.

Taking Cmd of the Situation

I decided to see if it would be easier to instrument cmd.exe to log commands rather than de-obfuscating the script myself. To begin, I debugged cmd.exe, set a breakpoint on CreateProcessW, and executed a program from the command prompt. Figure 3 shows the call stack for CreateProcessW as cmd.exe executes notepad. 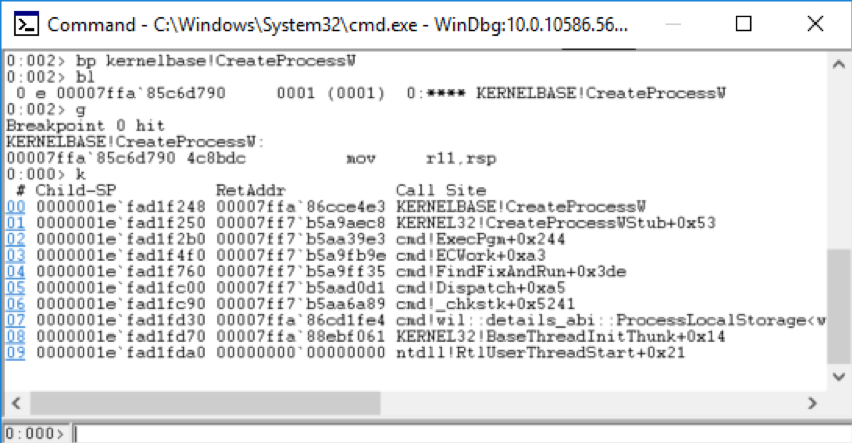 Starting from cmd!ExecPgm, I reviewed the disassembly of the above functions in cmd.exe to trace the origin of the command string up the call stack. I discovered cmd!Dispatch, which receives not a string but a structure with pointers to the command, arguments, and any I/O redirection information (such as redirecting the standard output or error streams of a program to a file or device). Testing revealed that these strings had all their environment variables expanded, which means we should be able to read the de-obfuscated commands from here.

Figure 4 is an exploration of this structure in WinDbg after running the command “echo hai > nul”. This command prints the word hai to the standard output stream but uses the right-angle bracket to redirect standard output to the NUL device, which discards all data. The orange boxes highlight non-null pointers that got my attention during analysis, and the arrows point to the commands I used to discover their contents. 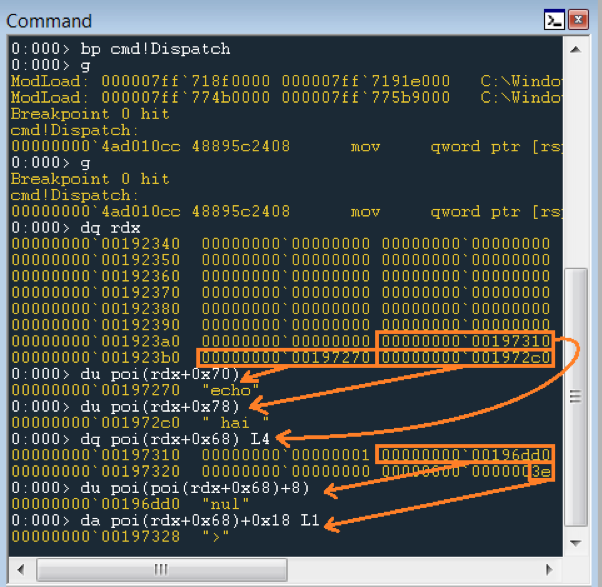 Figure 4: Exploring the interesting pointers in 2nd argument to cmd!Dispatch

Because users can redirect multiple I/O streams in a single command, cmd.exe represents I/O redirection with a linked list. For example, the command in Listing 1 shows redirection of standard output (stream #1 is implicit) to shares.txt and standard error (stream #2 is explicitly referenced) to errors.txt.

By inspection, I found that cmd!Dispatch is responsible for executing both shell built-ins and executable programs, so unlike breaking on CreateProcess, it will not miss commands that do not result in process creation. Based on these findings, I wrote a flare-qdb script to parse and dump commands as they are executed.

De-DOSfuscator uses flare-qdb and Vivisect to hook the Dispatch function in cmd.exe and parse commands from memory. The De-DOSfuscator script runs in a 64-bit Python 2 interpreter and dumps commands to both the console and a log file. The script comes with the latest version of flare-qdb and is installed as a Python entry point named dedosfuscator.exe.

De-DOSfuscator relies on the location of the non-exported Dispatch function to log commands, and its location varies per system. For convenience, if an Internet connection is available, De-DOSfuscator automatically retrieves this function’s offset using Microsoft’s symbol server. To allow offline use, you can supply the path to a copy of cmd.exe from your offline machine to the –getoff switch to obtain this offset. You can then supply that output as the argument to the –useoff switch in your offline machine to inform De-DOSfuscator where the function is located. Alternately, you can use De-DOSfuscator with a downloaded PDB or a local symbol cache containing the correct symbols.

Figure 6 demonstrates getting and using the offset in a single session. Note that for this to work in an isolated VM, you would instead specify the path to a copy of the guest’s command interpreter specific to that VM.

Figure 6: Getting and using offsets and testing De-DOSfuscator

This works great on the BatchEncrypted script in Figure 1. Let’s have a look. 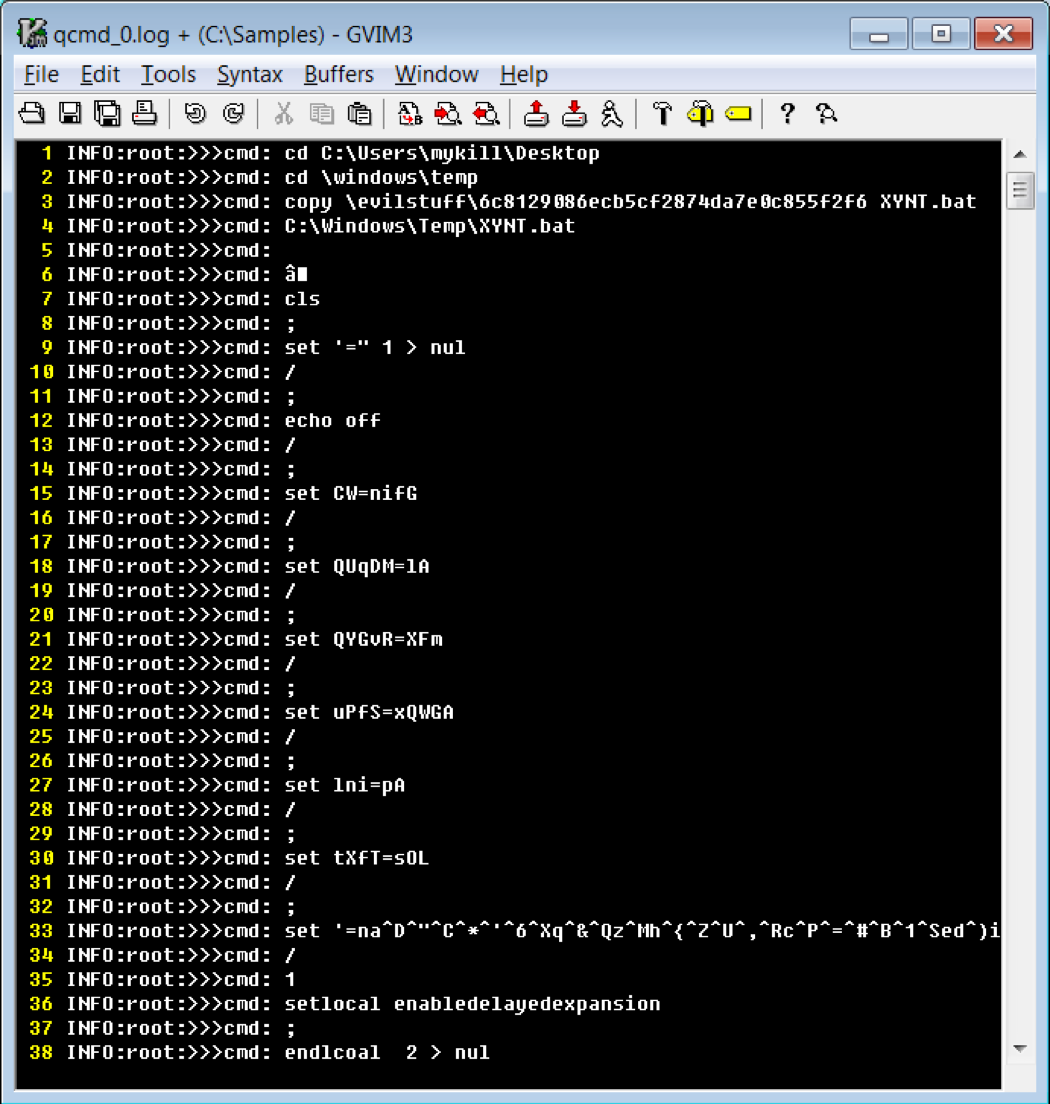 These environment variable manipulations give way to real commands as shown in Figure 8. One of the script’s first actions is to use reg.exe to check the NUMBER_OF_PROCESSORS environment variable. This analysis system only had one vCPU, which can be seen in the set “a=1” output on line 620. After this, the script executes goto del, which branches to a batch label that ultimately deletes the script and other dropped files. 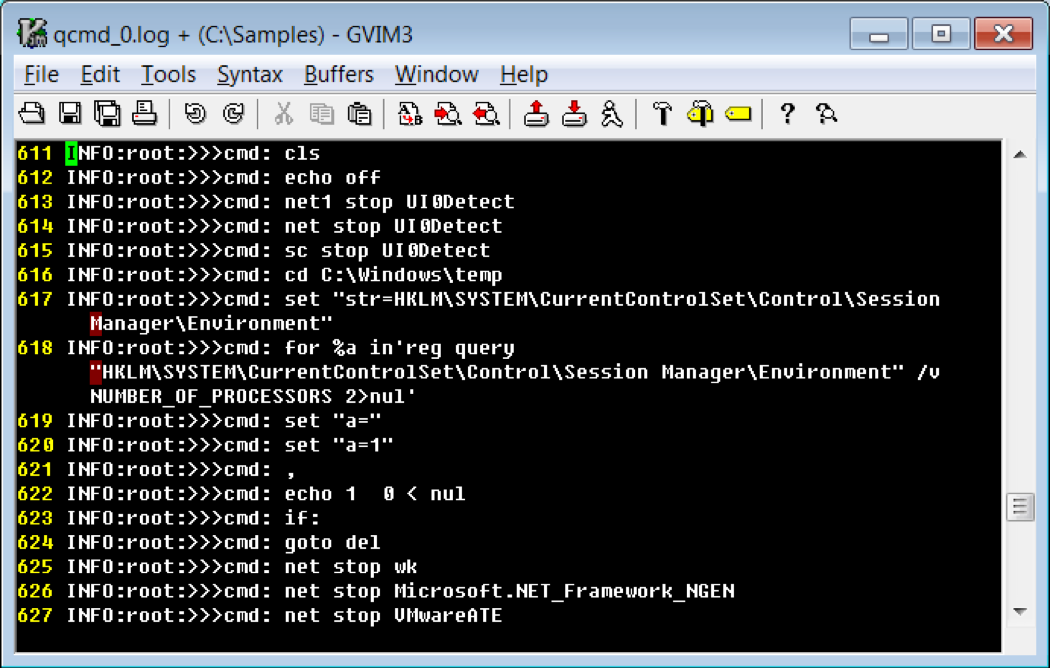 This is a batch-oriented spin on a common sandbox evasion trick. It works because many malware analysis sandboxes run with a single CPU to minimize hypervisor resources, whereas most modern systems have at least two CPU cores. Now that we can easily read the script’s commands, it is trivial to circumvent this evasion by, for example, increasing the number of vCPUs available to the VM. Figure 9 shows De-DOSfuscator log after inducing the rest of the code to run. 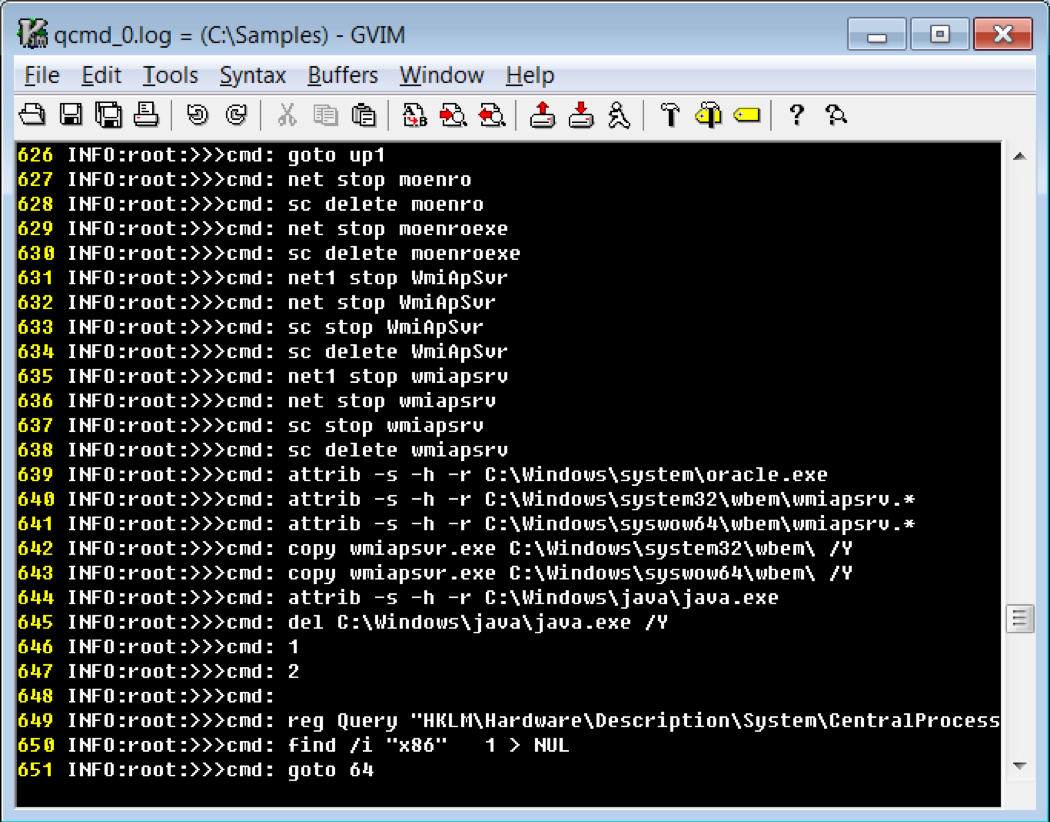 XYNT.bat calls a dropped binary to create and start a Windows service for persistence. The largest dropped binary is a variant of the XMRig cryptocurrency miner, and many of the services and executables referenced by the script also appear to be cryptocurrency-related.

Easter is a long way off, but I must present you with a very early Easter Egg because it is such a neat little find. During my journey through cmd.exe, I noticed a variable named fDumpParse having only one cross-reference that seemed to control an interesting behavior. The lone cross-reference and the relevant code are shown in Figure 10. Although fDumpParse is inaccessible anywhere else in the code, it controls whether a function is called to dump information about the command that has been parsed. 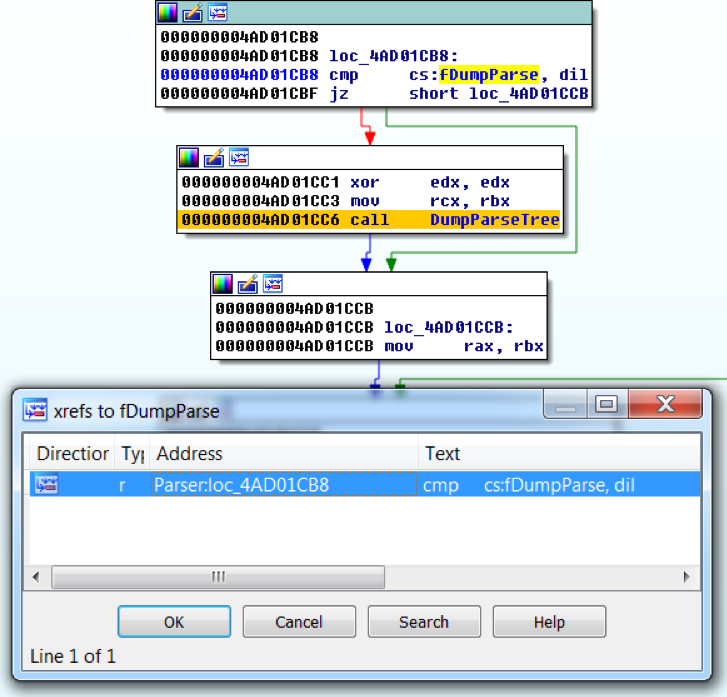 To experiment with this, you can use De-DOSfuscator’s –fDumpParse switch. You will then be greeted with a command prompt that is more transparent about what it has parsed. Figure 11 shows an example along with a graphical representation of the abstract syntax tree (AST) of parsed command tokens.

Microsoft probably inserted the fDumpParse flag so developers could debug issues with cmd.exe. Unfortunately, as nifty as this is, it has drawbacks for bulk de-obfuscation: 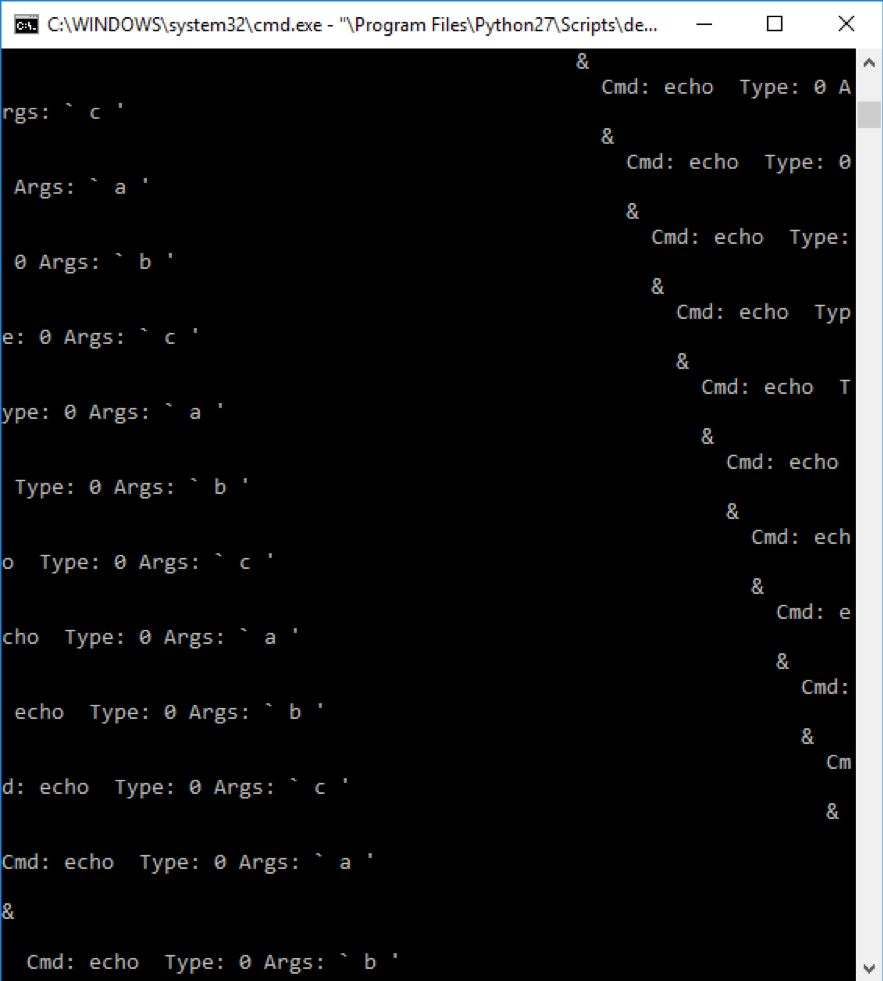 Consequently, fDumpParse is not ideal for de-obfuscating large, malicious batch files; however, it is still interesting and useful for de-obfuscating short scripts or one-off commands. You can get the offset De-DOSfuscator needs for offline use via –getoff and use it via –useoff, as with normal operation.

I have given you an example of a heavily obfuscated command script and I have shared a useful tool for de-obfuscating it, along with the analytical steps that I followed to synthesize it. The De-DOSfuscator script code comes with the latest version of flare-qdb and is accessible as a script entry point (dedosfuscator.exe) when you install flare-qdb. It is my hope that this not only helps you to conveniently analyze malicious batch scripts, but also inspires you to devise your own creative ways to employ flare-qdb against malware.