Invented by IBM, SMB (Server Message Block) is a file-sharing client-server network protocol that is used to access files and folders on a file level. CIFS (Common Internet File System) is the Microsoft implementation of SMB in Windows to allow users to exchange files via networks with read/write access. Shared folders are also called shares or SMB shares if the SMB file sharing protocol is used. Nowadays, SMB is more commonly used than CIFS, and, often, CIFS is used to refer  to SMB. SMB has been in use since the release of Windows NT 4.0. SMB v1 with Windows 2000. SMB v2 and SMB v3 are newer versions of the protocol and are more secure than SMB v1. SMB works over TCP, a transport protocol, and is also used to share printers in local networks.

The following ports must be open in the firewall:

After getting familiarized with the SMB definition, we can move on to the practical part.

Let’s look at how to configure SMB shares on a Windows machine in Workgroup. Windows Server 2016 is used in this example with the following parameters:

A local path to a shared folder: D:backupnakivo-repo

Configuration in the Windows GUI

Create a user. Let’s create a new Windows user account to access the shared folder. In my example, I’m creating a new user on a local computer running Windows Server 2016 in Workgroup.

In the Computer Management window, go to Local Users and Groups > Users.

Right-click an empty place, and, in the context menu, hit New User. 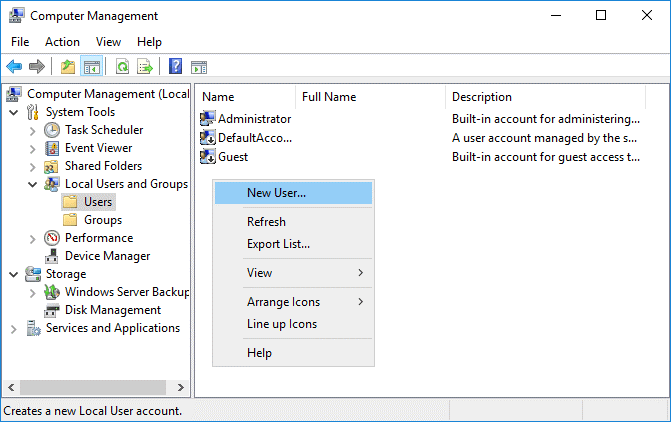 In the New User window, set the needed parameters. 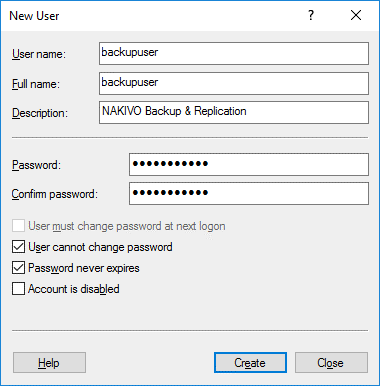 A user is now created. You can see the result in the screenshot below. 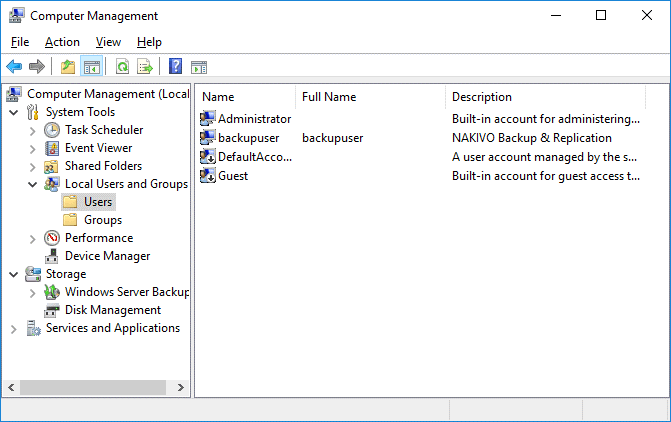 Open the Sharing tab, and hit Advanced Sharing in the folder properties window. 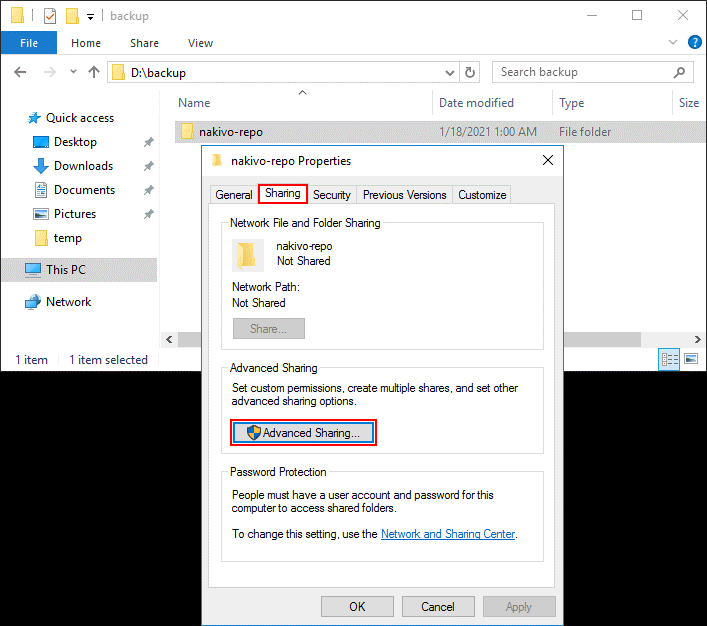 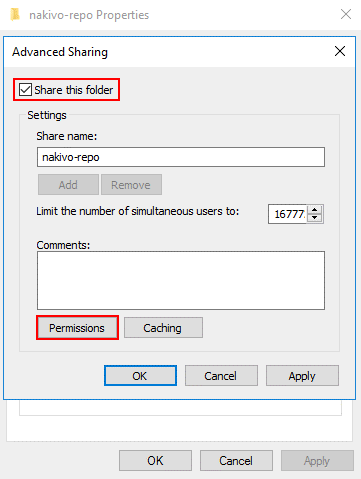 By default, everyone can read contents in a shared folder. Click Add to add a user or a group. 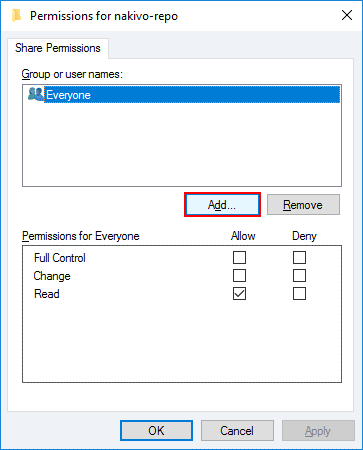 Enter the object names to select: backupuser (select the user that was created before).

If you entered a name correctly, the name is underlined after checking. Hit OK to save settings and close this window. 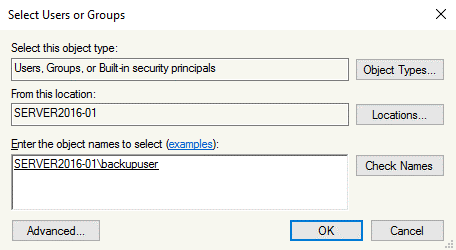 Select the backupuser and select the Allow Full Control checkbox in the Permissions section. You can deselect the read permissions that are set by default. Hit OK to save settings, and close the window. 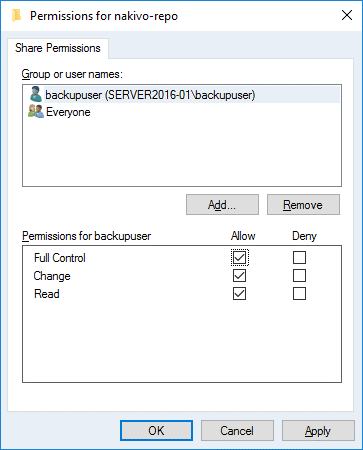 Then hit OK once again to close the parent window. Click Close in the folder properties window.

A shared folder is configured now.

Configuration in the command line interface

Run CMD as an administrator.

Create a folder that you want to use for the Backup Repository:

Create a backup user in Windows:

If you need to add a user to a group, use a command like:

Run this command to disable changing passwords for the backupuser:

Share the folder that you have created. Grant all permissions to backupuser.

Configuration in an Active Directory domain

If you have not installed NAKIVO Backup & Replication yet, download the product from the official website, and install the product in your environment.

Open the web interface of NAKIVO Backup & Replication. In my example, I use the address: 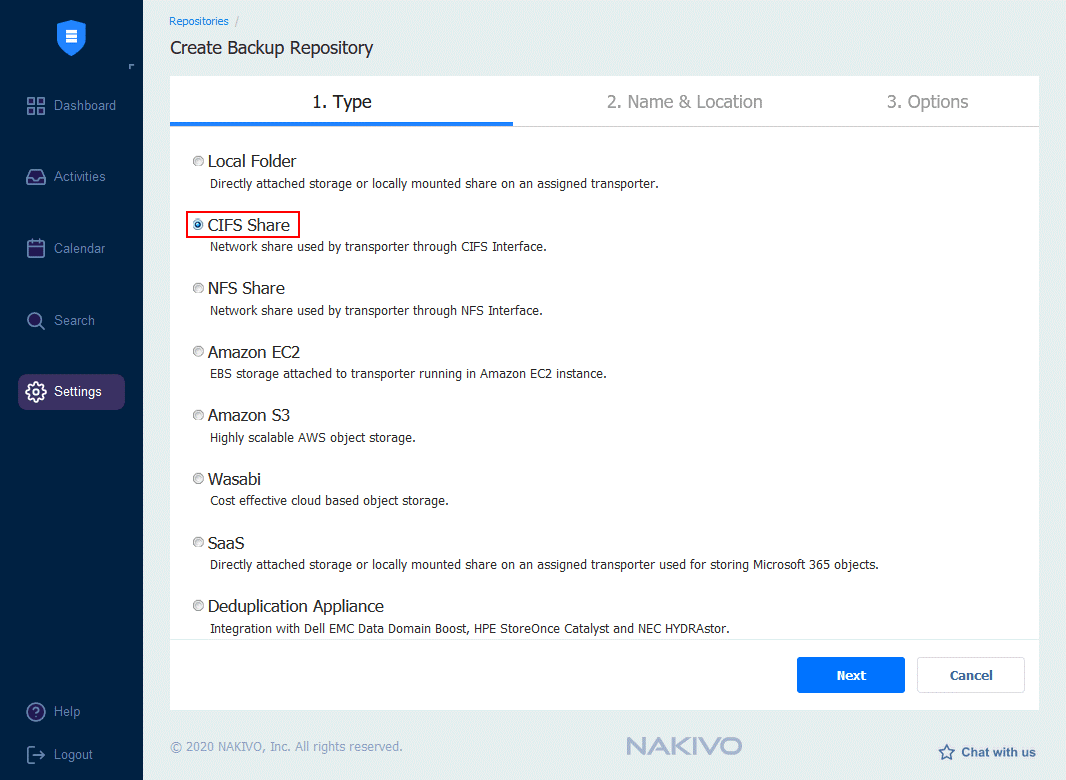 2. Name & Location. Enter a repository name to be displayed in NAKIVO Backup & Replication and define the parameters of the SMB share (CIFS Share) to create the Backup Repository.

If you use a domain user account to access the shared folder, enter a user name in the format: domainnameusername. 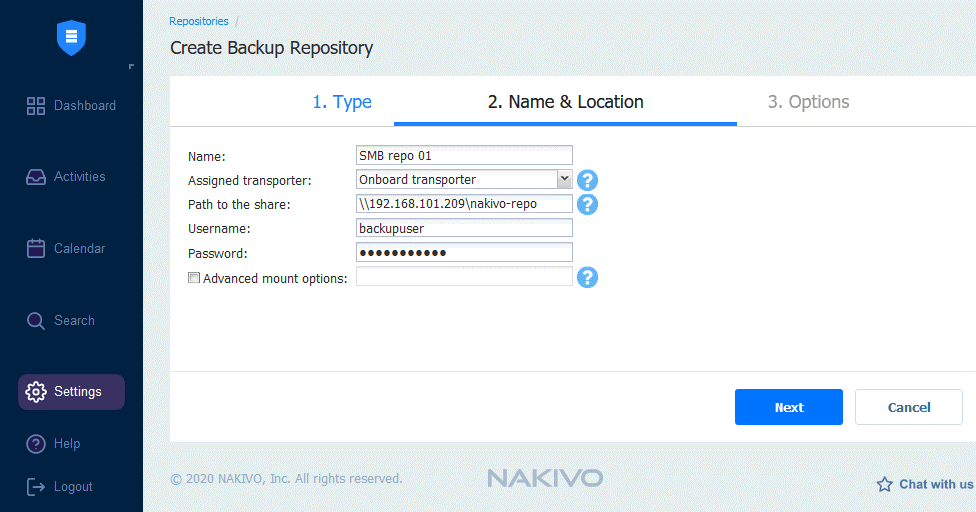 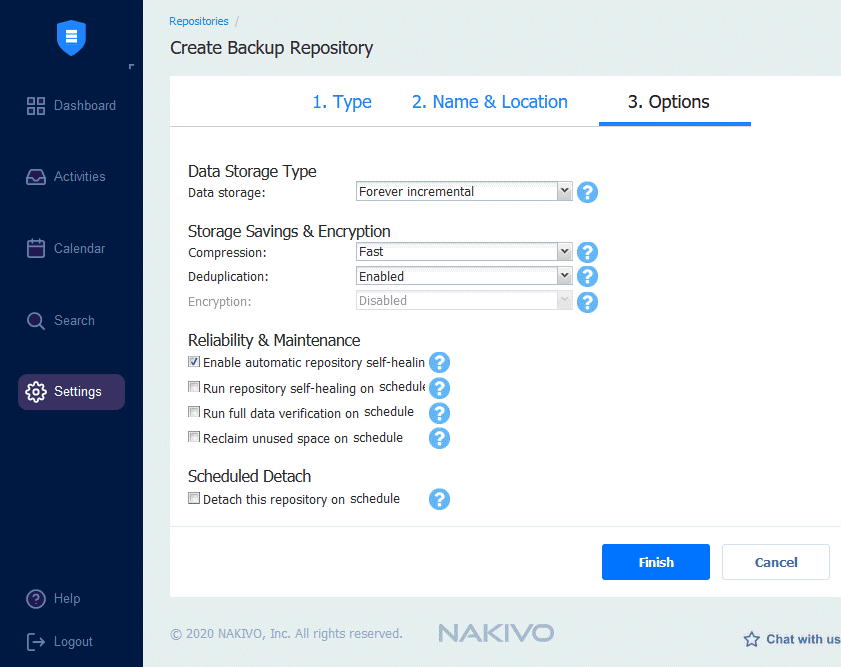 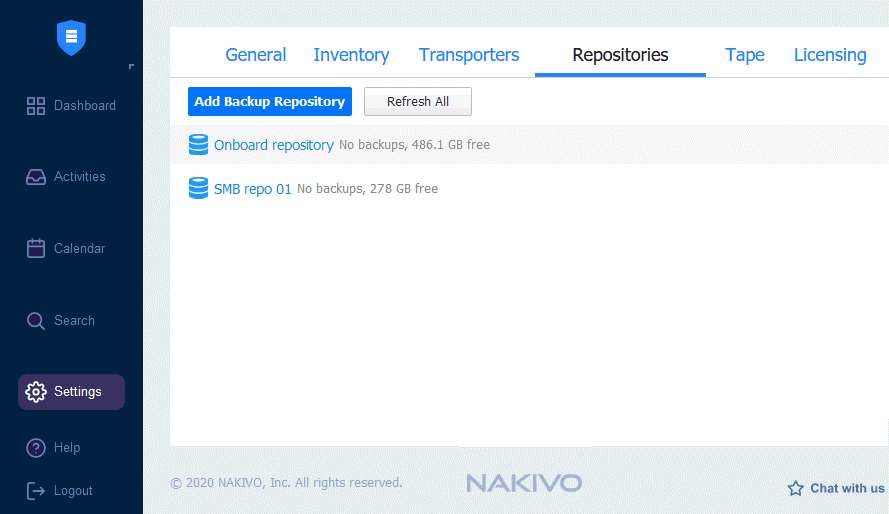 You can click the Backup Repository name and see detailed information about this repository. 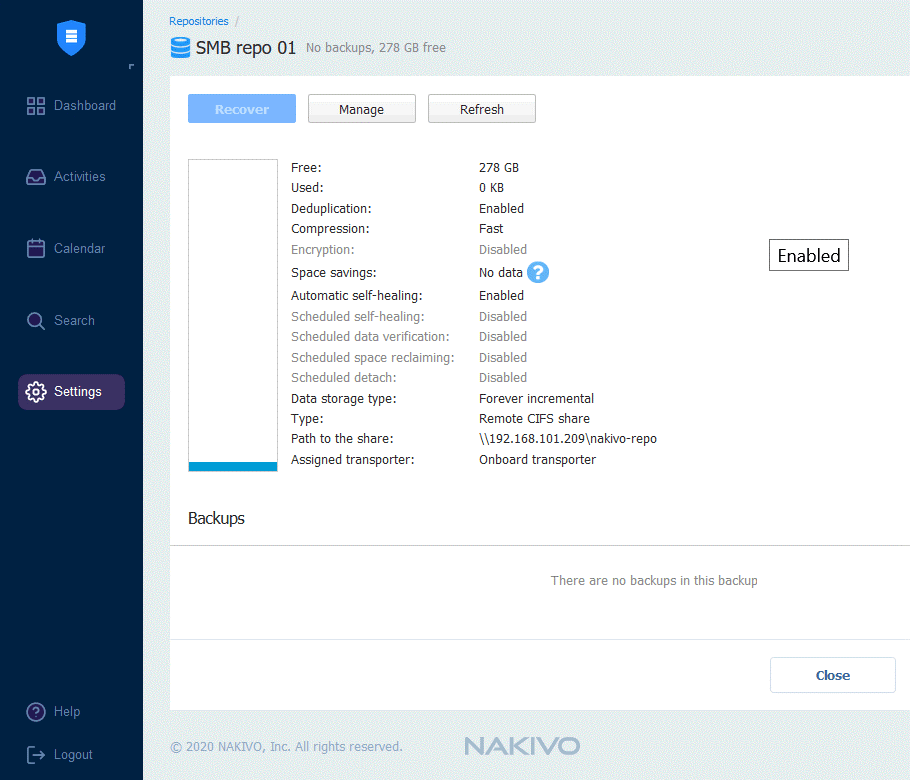 A Backup Repository has been set up to store backups in an SMB share. Now you can create backup jobs and back up data to the created repository. Read also about backup of VMware vSphere VMs, Microsoft Hyper-V VMs, physical Linux machines, Windows machines, and Amazon EC2 instances. You can back up these source machines to SMB shares with NAKIVO Backup & Replication.

You can download the Free Trial of NAKIVO today to start exploring all the features and functionality of NAKIVO Backup & Replication without any limitations!

This blog post has covered the creation of SMB shares in Windows and using them to create Backup Repositories in NAKIVO Backup & Replication. Configuration requires creating a folder on a server, creating a user account, configuring SMB file sharing settings and user permissions for a shared folder, and, finally, creating a backup repository in NAKIVO Backup & Replication using the shared folder accessible via the network. The SMB protocol is widely used and is convenient to store files in local networks. You can also create SMB shares on Linux machines and NAS devices to store backups.

This post was first first published on Official NAKIVO Blog website by Michael Bose. You can view it by clicking here