VMware vSphere is one of the best hardware virtualization platforms used around the world. Most users automatically associate virtualization with VMware. System administrators respect VMware for its great reliability, performance and usability. The official vSphere 7 release date was April 2, 2020. vSphere 7 is the newest version of the virtualization platform adding many new features. VMware vSphere has been significantly “rearchitected” for version 7. In this blog post, I will go over the new features in vSphere 7 to help you decide if it’s worth updating to vSphere 7 for you or you continue to use your current vSphere version.

Whatever the vSphere version you use, don’t forget to perform VMware vSphere backup that includes virtual machines running on ESXi hosts and clusters. NAKIVO Backup & Replication supports VMware vSphere 7 and backup of VMs in clusters including fault-tolerant virtual machines. Download the free trial version of the product and protect VMware VMs in your environment. 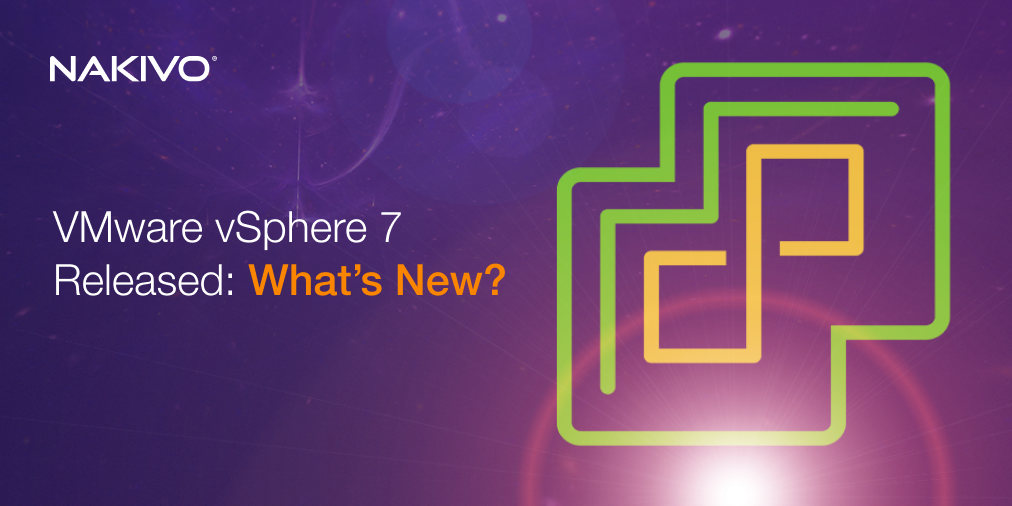 Docker containers are popular among developers who create applications using the microservice architecture. Kubernetes can run containers in a cluster and provides load balancing, high availability and scalability. VMware vSphere 7 is fully integrated with Kubernetes. Now administrators can provision, run, and manage Kubernetes clusters on top of vSphere via the Kubernetes interface. Supporting both containers and virtual machines on a single platform allows vSphere 7 to run Kubernetes pods on virtual machines by using the vSphere POD Service. VMware vSphere PODs can be managed like existing VMs.

VMware DRS cluster (Distributed Resource Scheduler) has been improved in vSphere 7. Now DRS can ensure load balancing for both VMs and containers. In vSphere 6.7, the DRS checks a load of each ESXi host in a cluster. If one host is overloaded and another host has a lot of free resources, a recommendation to migrate a VM (or VMs) from the overloaded host to the host that has free computing resources is provided in the automatic or manual mode.

Unlike the DRS in the previous versions of vSphere, in vSphere 7 the DRS isn’t aimed at balancing ESXi host load. This is the biggest difference. The main priority of the DRS is no longer caring about ESXi host utilization but rather the virtual machine “happiness”. This means that provisioning enough resources for a VM is the objective. The redesigned DRS provides a more workload-centric approach.

The new vCenter can simplify management and operations with new VMware features. Now vCenter 7 cannot be installed on a Windows machine. VMware vCenter 7 can be deployed only as a virtual appliance (VCSA – vCenter Server Appliance) based on a Photon OS (a Linux-based operating system maintained by VMware). There is no more Flash-based vSphere Web Client. Only HTML5 vSphere Client that supports all features now can be used for vCenter management. You don’t need to install any additional plugins or add-ons in your web browser for using HTML5 vSphere Client. vCenter 7 can be deployed on an ESXi host 6.5 or 6.7. It is not possible to deploy vCenter 7 on ESXi 6.0. VMware vCenter 7 can manage the following versions of ESXi: ESXi 6.5, ESXi 6.7, and ESXi 7.0. Hosts running ESXi 6.0 cannot be managed by vCenter 7.

The Platform Service Controller is consolidated into vCenter Server 7.

Configuration maximums for vCenter 7 have been increased. vCenter 7 supports a higher number of VMs and ESXi hosts than vCenter 6.7:

vCenter Server Upgrade Planner is part of vCenter. It uses vSphere Lifecycle Manager to notify a system administrator about potential problems with updates.

Image-based backups of vCenter are not supported in vSphere 7. Use NAKIVO Backup & Replication to perform image-based backup of VMware VMs including VMs running vCenter Server 7.

In vSphere 7, VMware Update Manager has been deprecated. vSphere Lifecycle Manager (VLCM) is provided as part of vCenter for managing lifecycle operations and configuration management in vSphere, such as installing updates, patches and upgrades, and applying ESXi host profiles. VLCM can also manage firmware updates for your platform. The update process can be automated. The Lifecycle Manager operates with images for installing or updating software for vSphere components. The image can contain elements such as versions of ESXi, vendor add-ons (patches, drivers), and components (sets of VIBs, payloads, bulletins).

Features of the VM hardware version 17:

Unlike vSphere 6.7, the following processor generations are not supported in vSphere 7:

You can check the VMware compatibility matrix to check whether your hardware is supported.

vSphere Trust Authority (vTA) is a new technology that creates its own management cluster. It works separately from other clusters and serve as the hardware root of trust. The vTA management cluster distributes encryption keys for the Key Management Servers (KMS). Virtual machines and virtual disks can be encrypted using trusted key providers.

VMware vSAN, which is used as an element to build a hyper-converged environment, was also updated in vSphere 7. The following are the improvements introduced in the latest version:

Some users prefer to use a VNC server to manage running VMs. A built-in VNC server is not available any more if you use vSphere 7. You can use VM Console or VMware Remote Console to manage VMs. You can connect to vCenter servers and ESXi hosts where your VMs are residing by using VMware Workstation for VM management. If you need to use VNC, you can install the VNC server on a guest OS of a virtual machine manually. TSL 1.0 and TSL 1.1 are disabled by default.

Compared with vSphere 6.7, vSphere 7 has a different licensing model. VMware vSphere 7 is licensed on a per-processor basis. Each CPU installed on an ESXi server must have at least one license. One license can cover 32 physical cores of a processor. If a processor on your server has more than 32 cores, you need to assign an additional license. The number of virtual machines is not limited by a license.

There are two main editions of vSphere 7 available for customers – vSphere 7 Standard and vSphere 7 Enterprise Plus.

The main differences between these two editions are:

VMware vSphere Hypervisor can be used for free just as for previous versions of ESXi (applicable for standalone ESXi hosts). Read the blog post about free ESXi to learn more.

When you install VMware ESXi 7 or vCenter 7, a 60-day free trial period is started and all features of the Enterprise Plus edition are available for 60 days.

VMware Essential Kits can be bought additionally to extend the functionality.

Kubernetes support is available in ESXi and vCenter, but you need to deploy VMware NSX to ensure networking capabilities for Kubernetes and SDDC Manager to orchestrate the software defined datacenter (SDDC). A combination of vSphere, NSX, and SDDC Manager is known as VMware Cloud Foundation.

VMware vSphere add-on for Kubernetes must be bought in addition to the vSphere Enterprise Plus license if you need to deploy Kubernetes in vSphere 7. This add-on is available as part of the VMware Cloud Foundation.

VMware vSphere 7 is a new powerful version of the enterprise level virtualization platform that holds the leading positions in the IT world. This latest version of the popular virtualization product contains a lot of great changes and can be used to build a hyper-converged virtual environment. This blog post contains elements of vSphere version comparison and is focused on familiarizing you with the new features of vSphere 7.

VMware vSphere 7 is definitely worth your attention. Consider updating to vSphere 7 from previous VMware versions if you need to use Kubernetes, clustering features with live migration of large VMs, and VM templates with Content Library. Don’t forget that the licensing model has been changed compared with vSphere 6.7. Calculate costs for running VMs in vSphere 6 and vSphere 7 in your environment before making a decision about migrating to vSphere 7 from vSphere 6.

This post was first first published on Official NAKIVO Blog website by Michael Bose. You can view it by clicking here