Before getting into the installation process, let’s explore some of the capabilities of Office 365 ProPlus.

What is the difference between Office 365 and Office Professional Plus? MS Office Professional Plus (2016, for example) is a traditional version of Microsoft Office that is licensed on a perpetual basis (a device-based model) but is updated until the support period ends. Office 365 uses a subscription licensing method (a user-based model) and is updated until you pay for subscription. Office 365 offers different editions for subscription, including ProPlus, E1, E3, E5, etc. Note that Office 365 ProPlus in not the only edition that supports desktop virtualization. Office 365 ProPlus, Office 2016 ProPlus and Office 2016 Standard are recent versions that support terminal environments.

The main requirements to install Office 365 ProPlus on a remote desktop server are:

When your environment meets the requirements, you can go to Office 365 ProPlus remote desktop configuration.

It is recommended that you uninstall all previous versions of Microsoft Office from the computer before you install Office 365 ProPlus on that machine.

Create the directory to store the files needed for the installation process.

If you need to deploy Office 365 ProPlus on multiple servers, you can share this directory (for example, \server_nameOffice365install) and use this single shared directory for installation.

The installer file of Office Deployment Tool is downloaded:

Run the file with administrative privileges. Accept the license agreement and select a directory to which you want to extract files. In our case, the files will be extracted to the same directory:

In the configuration above, the Product ID is O365ProPlusRetail. You can also install additional Office software by adding similar sections with the following parameters:

For example, to install Visio, add the following section to the xml configuration file:

Note that these two strings must be added to the default configuration to install Office 365 ProPlus in remote desktop environments:

If you shared a directory where installation files are stored, use that shared directory that is accessible for multiple servers instead of the local directory of this server. In our example C:tempOffice365install would be changed to \server_nameOffice365install for this purpose.

Go to the directory where the files of Office Deployment Tool are stored:

Wait for a few minutes. The time needed to download the files depends on the speed of your internet connection. When the cursor moves to a new line and allows you to run a new command, it means that the downloading process has been completed. If you run the same command later, for example, in two months, the installation files will be updated.

You can see a subfolder that is named Office in the Office365install directory. You can check the folder properties and its size to make sure that the files have been downloaded properly.

Now run the next command to extract and configure files and install Office 365 ProPlus on an RDS Server.

Wait until installation is done.

Now log into the terminal server with a remote desktop client and run the needed Office 365 ProPlus application. Enter the Office 365 credentials associated with the subscription plan – otherwise most features will be locked. 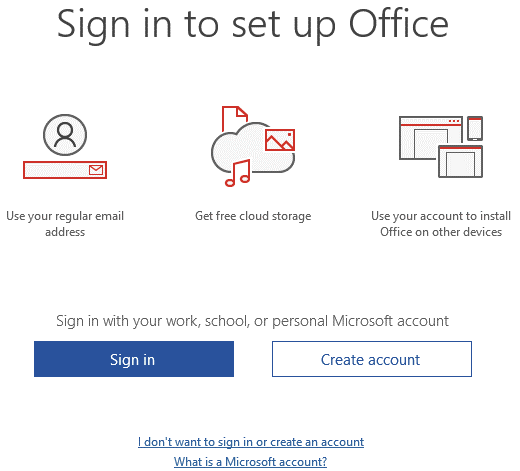 Sometimes the following error can occur:

If the method explained above didn’t help you install Office 365 ProPlus on a remote desktop server, try to edit some registry values on that server.

Open the registry editor (Win+R > regedit) and go to this path:

Add the SharedComputerLicensing key and set its value to 1.

And set its state to Enabled

Microsoft Office can be installed on machines running Windows and macOS. The web version of Office 365 can be used from anywhere on any machines that have a web browser. If you install Office 365 ProPlus on a remote desktop server, users can get Microsoft Office applications from any machine and any place where they have network access to the terminal server. A subscription plan with a per-user and a not per-machine licensing model is to be used in this case. This blog post explained what is Office 365 ProPlus and how to install Office 365 ProPlus on a terminal server. You have to download Office Deployment Tool, edit the xml configuration file and run commands in Windows command line. Read also how to use the command line for connecting to Exchange Online and how to perform Office 365 backup.

The post A Guide on How to Install Office 365 ProPlus on a Remote Desktop Services Server appeared first on Official NAKIVO Blog.